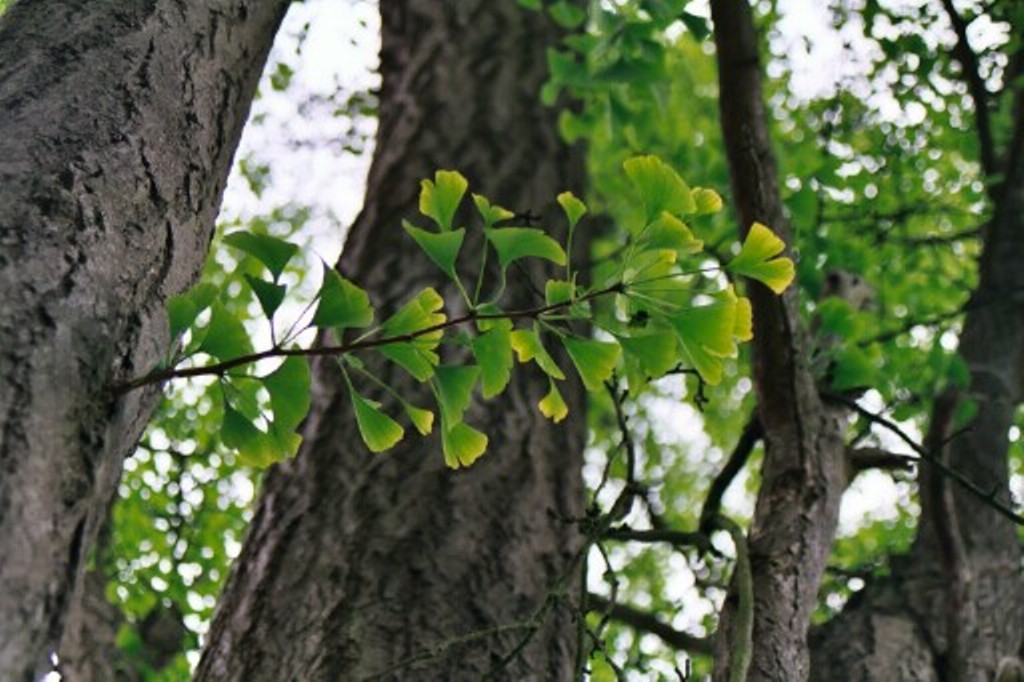 Maidenhair trees (Ginkgos) are also popular subjects for growing as penjing and bonsai; they can be kept artificially small and tended over centuries. They are amazing trees in that they are the sole surviving species of a group of Gymnosperms that flourished 65 million years ago, around the time of the dinosaurs. 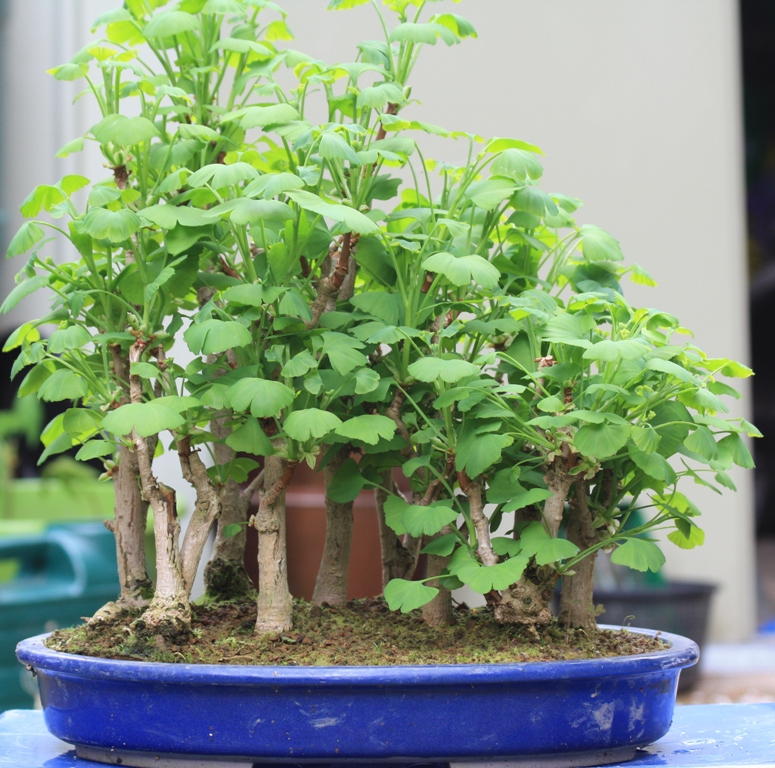 This tree can live as long as a 1,000 years. It is usually classed as a conifer despite having no cones, and is in fact more primitive than the true conifers. It loses it leaves in winter therefore is deciduous and they turn bright yellow in autumn prior to leaf fall. The female tree bears fruits that are plum like and orange to yellow when ripe but smell foul when crushed. The Latin name is Ginkgo biloba from the family Ginkgoaceae. The species was initially described by the father of taxonomy Linnaeus in 1771, the specific epithet biloba derived from the Latin bis ‘two’ and loba ‘lobed’, referring to the shape of the leaves. It is a monotypic genus and deciduous tree. 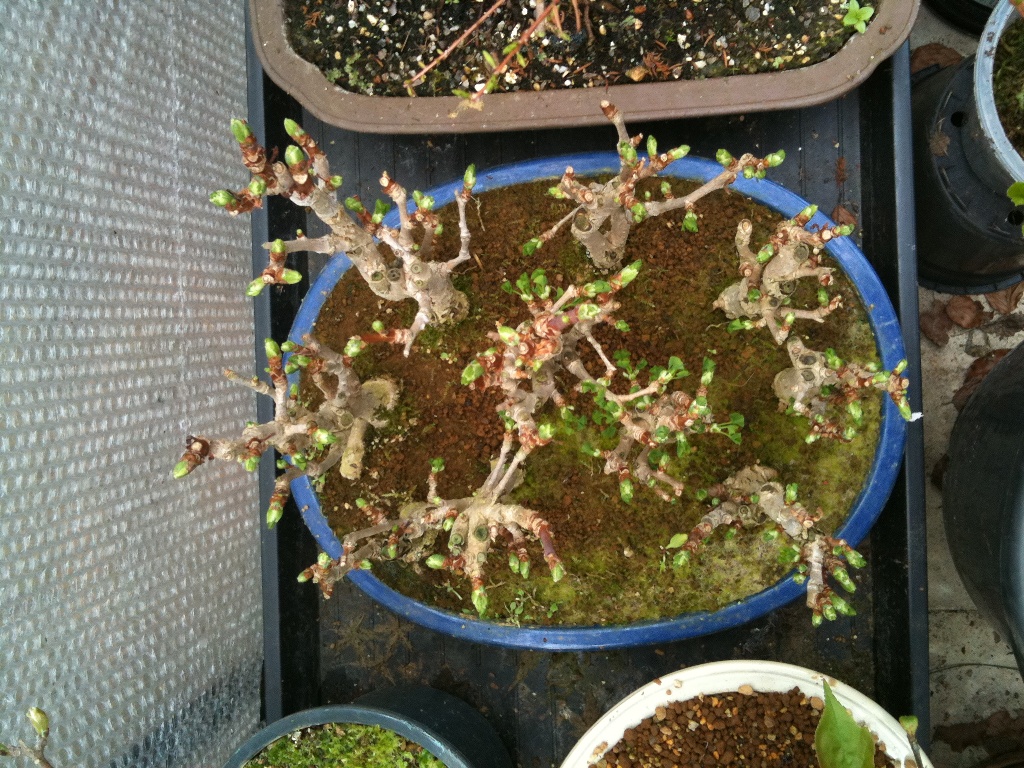 Bonsai tree care
Ensure that you position your Ginkgo trees in full sun or slight shade for young trees and protect from frost especially the roots by wrapping the pot in winter as they are usually a deep rooted tree. Water daily throughout the growing season and moisten the soil thoroughly at each watering but do not let them become overly soggy as this rots the trunk. Keep them relatively dry in winter as wet roots are easily frost damaged.

With regard to feeding, fertilise at the start of spring and again in mid summer or as per the requirements of the tree which varies if the bonsai is developing or established already. A low nitrogen feed can be applied in early autumn to promote a stronger autumn colour.

They tend to need repotting annually and do this in early spring until ten years old, then every second year using basic soil mix, while for mature trees re pot every three years. They tend to like a fine silty mix with good drainage and a ph range of 5-5.5. They are also generally free from pests and diseases with insect resistant wood. 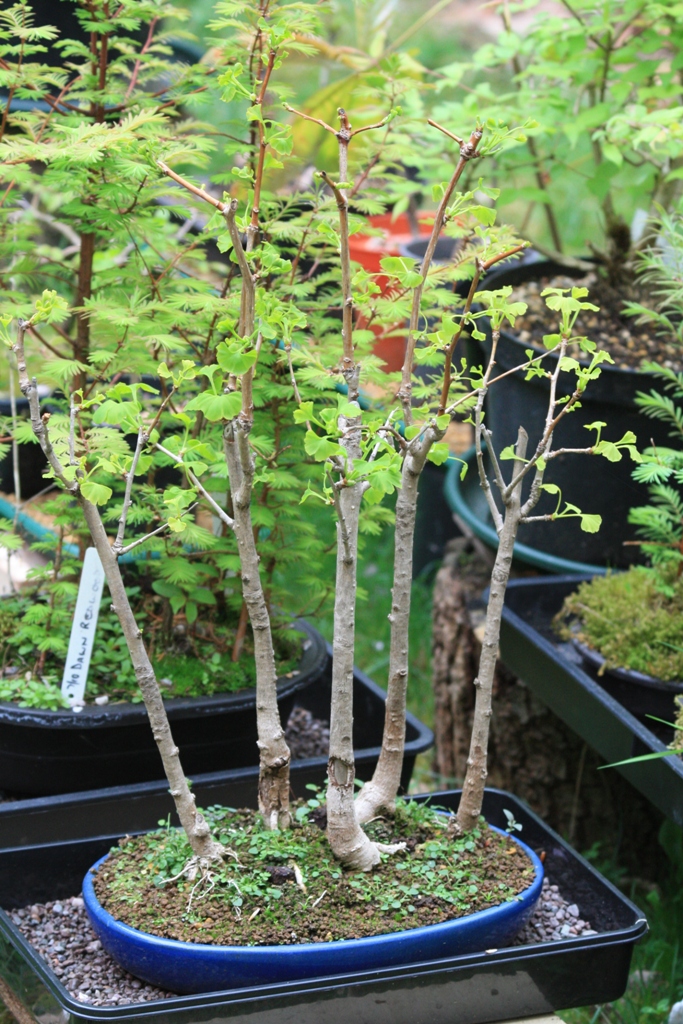 Ginkgo group in need of pruning

Pruning
The leaves are very usual and quite unique in that they are fan-shaped with veins radiating out into the leaf blade. These veins sometimes split but never fully join. The leaves are usually 5-10 cm, but with repeat pruning will reduce in size. The leaves are borne both on the more rapidly-growing branch tips, where they are alternate and spaced out, and also on the short, stubby spur shoots, where they are clustered at the tips. 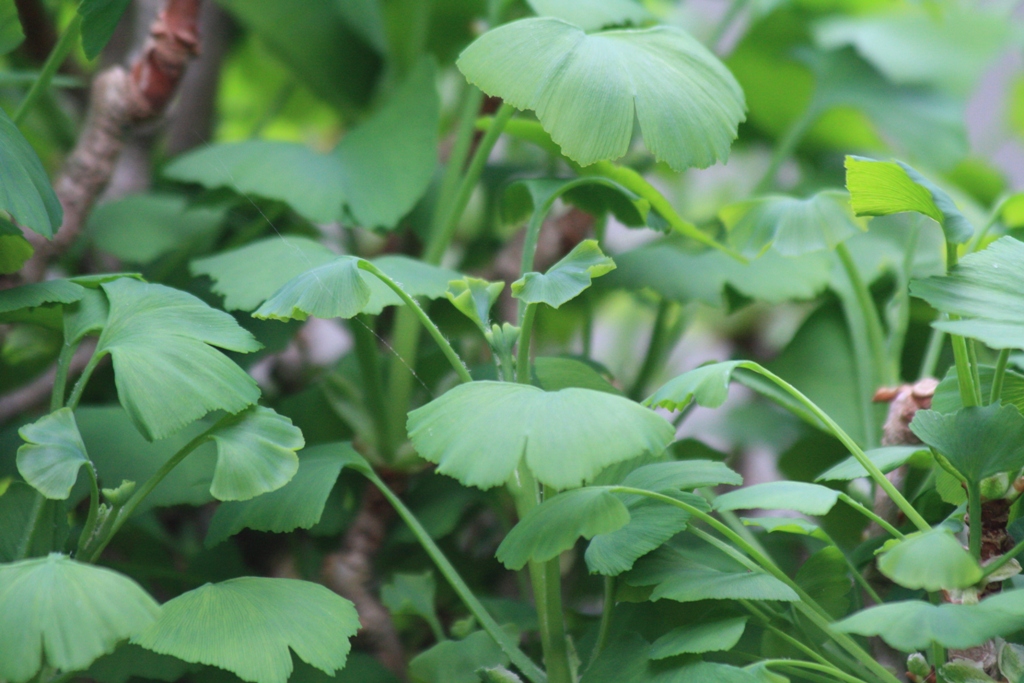 So subject to the current development of your tree, prune at least twice during the growing season, by trimming new shoots to two or three leaves, leaving top most leaf on outside. Avoid wiring where possible as bark marks easily and this species does not need wiring generally. The bark is delicate so if you do wire, apply carefully and lightly and use aluminium wire. To aid with bark protection wrap the bark in raffia first and check regularly. However, avoid large visible cuts as they will not grow over and prune branches after leaf fall. 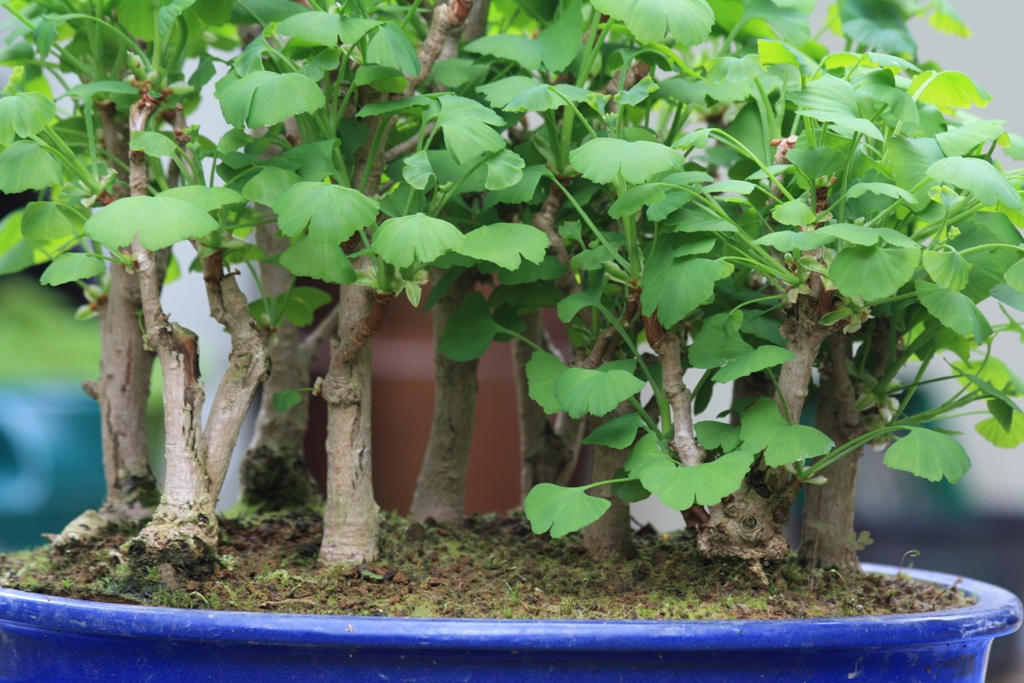 Ginkgo branches grow in length by growth of shoots with regularly spaced leaves. From the axils of these leaves, “spur shoots” (also known as short shoots) develop on second-year growth. Short shoots have very short internodes (so they may grow only one or two centimetres in several years) and their leaves are usually unlobed. They are short and knobby, and are arranged regularly on the branches except on first-year growth. Because of the short internodes, leaves appear to be clustered at the tips of short shoots, and reproductive structures are formed only on them (seeds and leaves are visible on short shoots). In Ginkgos, as in other plants that possess them, short shoots allow the formation of new leaves in the older parts of the crown. After a number of years, a short shoot may change into a long (ordinary) shoot, or vice versa. 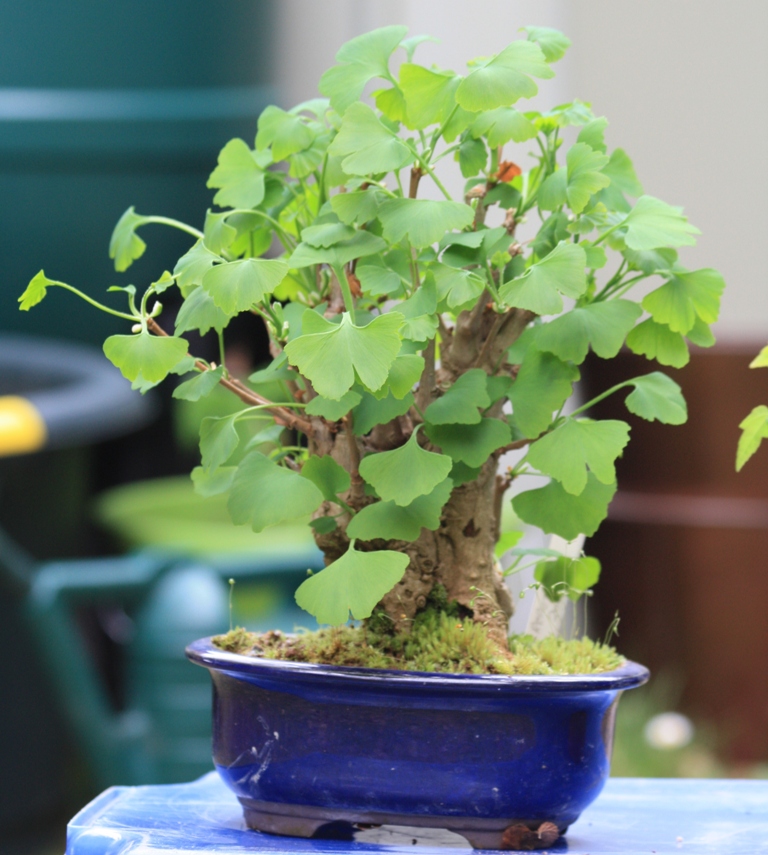 Styling
Ginkgo’s as bonsai tend to be a very upright form creating the informal upright style and are prone to developing an erratic branching structure which is the trees natural form. They are conical when young but develop a broader crown with the development of branches. So to prune you Ginkgo bonsai just prune the branches which are too long so that its form keeps in balance. Its natural shape is a good style.

The large leaves and rather stiff, thick branches make it suitable for medium to large size growth. So a broomlike style iis common with an oval pot and towards the top an even pointed shape (like a candle flame) or the Chokkan- or Moyo-Gi-style can be applied. In addition they make a good twin trunk, raft, clump or sinuous style. They can also make good Shohin but a small leaf variety is best. 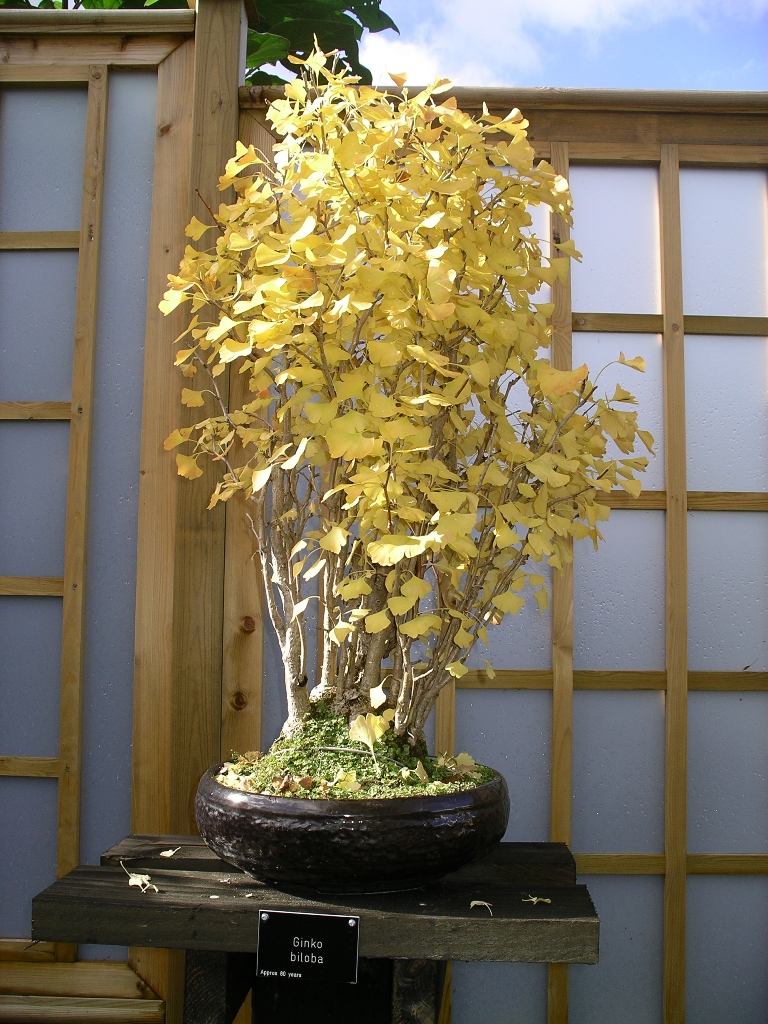 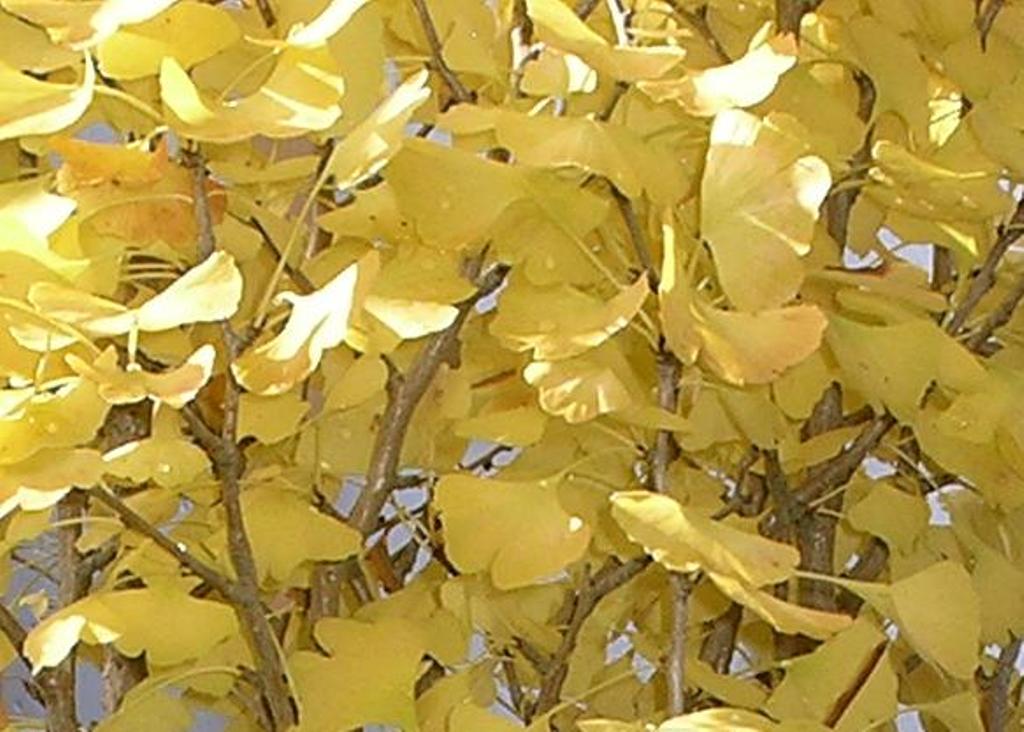 Propagation
If you want to propagate from hard wood cuttings do this in autumn, while you tend to set air layers in spring. Furthermore, the trees are easy to propagate from seed (fertilisation occurs in early autumn) but you can also graft a female branch onto male tree for seed production. To explain the above, ginkgos are dioecious, which means they have separate sexes, some trees are female and others are male. Male trees produce small pollen cones while female trees do not produce cones. 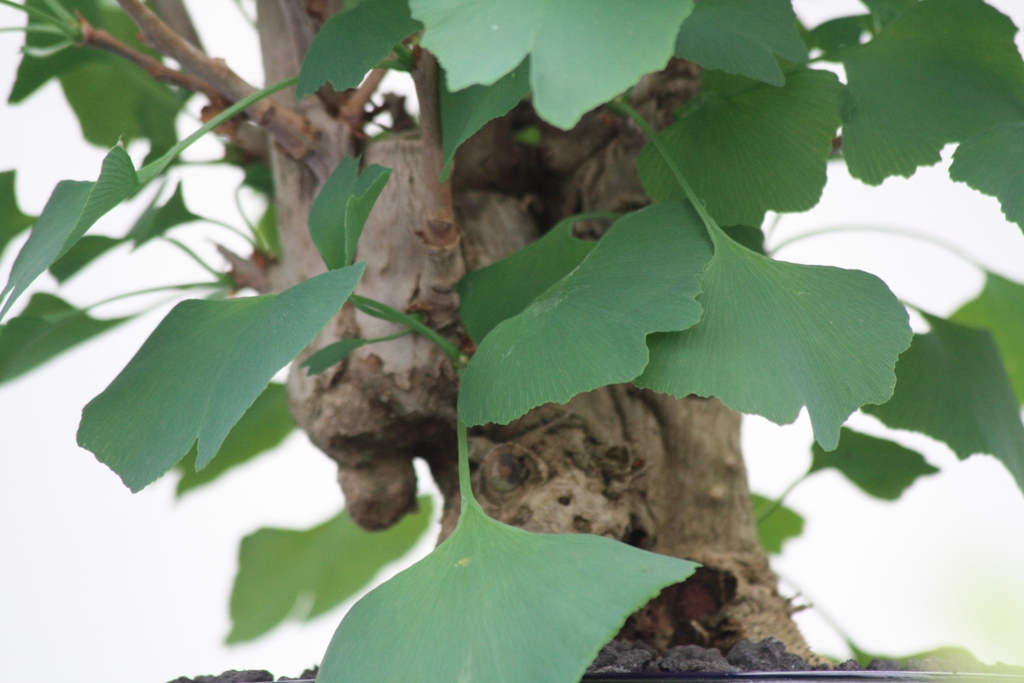 ‘Chichi Icho’
Not all but some Ginkgos produce aerial roots, known as ‘Chichi Icho’ (Japanese “nipples” or “breast”) or Zhong-ru (Mandarin Chinese). These form on the undersides of large branches and grow downwards. The growth of chi chi is very slow and may take hundreds of years to develop. The function of these thick aerial roots is currently unknown but they are a desirable feature for bonsai. 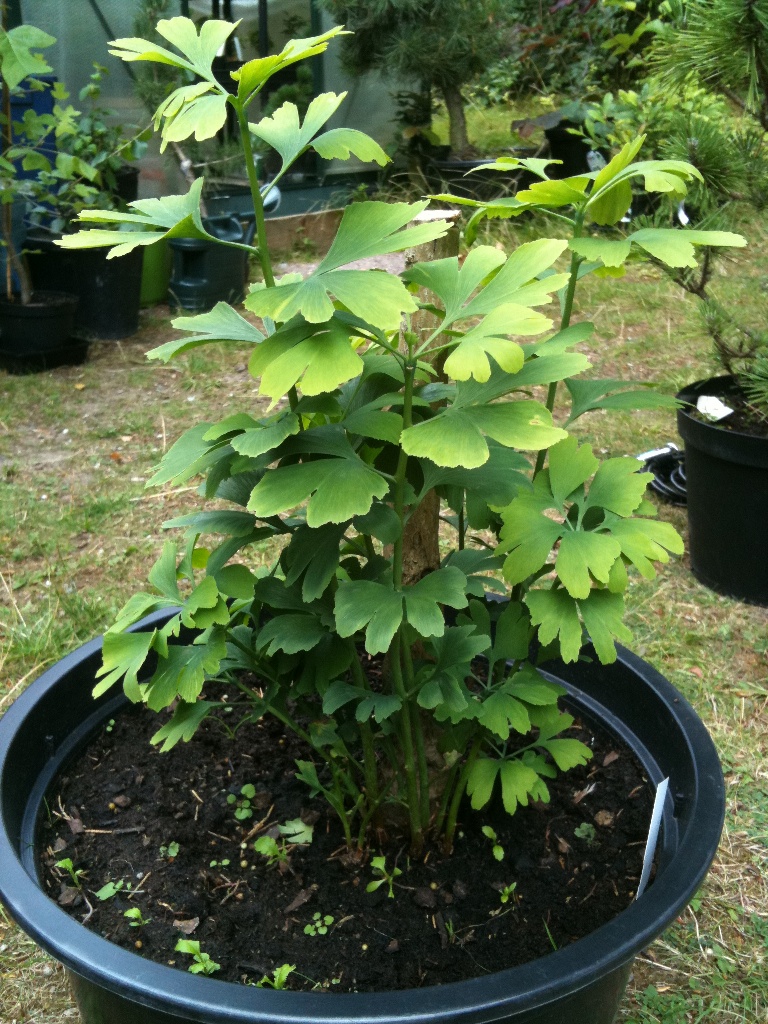 Example of starter stock for development into a Ginkgo bonsai

Identification and cultivars
There are no morphological differences to determine sex of the trees beyond that of the seed or cone production. Some refer to a rounded leaf being female and a wavy leaf margin as male but inconclusive. 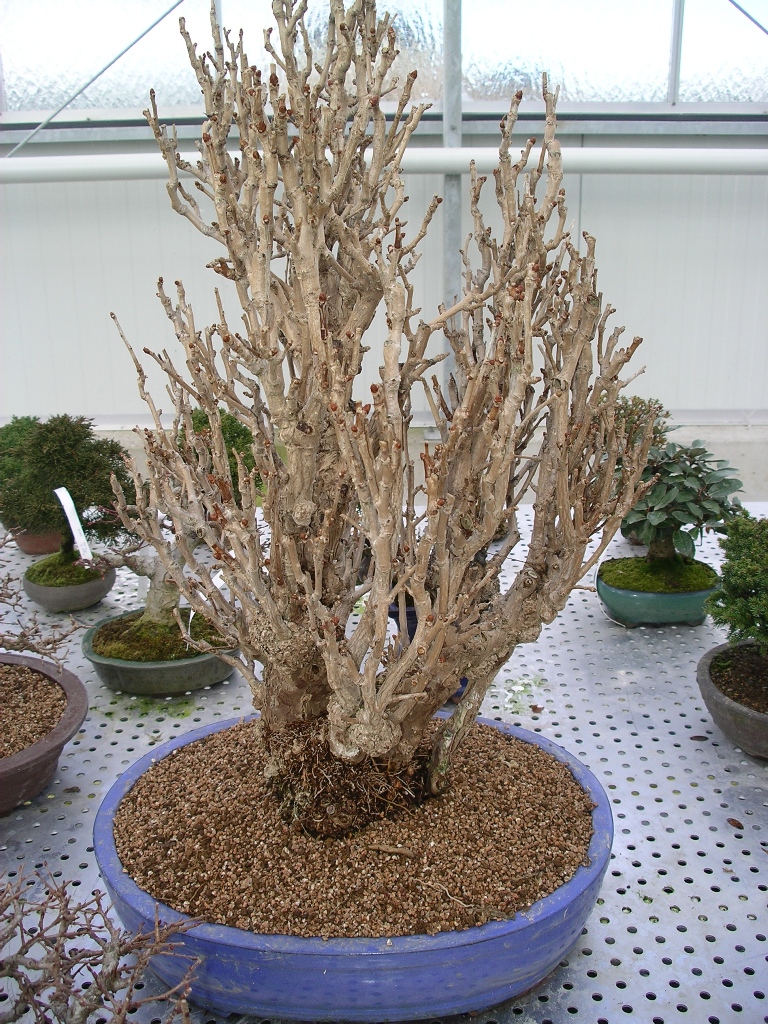