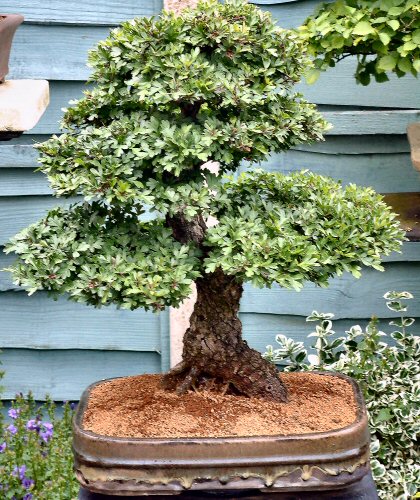 This Hawthorn was collected in 1990 from the side of a disused railway line. It was planted in a deep tub because most of the  root I was able to get out with it was about 4 inches higher up the trunk than the soil level I eventually wanted (as shown in the picture below).

There were only a few small fine hair roots lower down, over the next 8 years I slowly pruned out the roots at the top gradually lowering the soil level to expose the nice wide base shown in the picture above. The lower roots were allowed to grow freely and only pruned lightly as re-quired.

The tree is planted in pure Acadama and fed with Chempak No.8 at quarter strength several times a week . For years I had to spray with a fungicide to keep the leaves in good condition and some years even leaf prune to keep a healthy set .The tree now looks healthy and in the spring of 2003 produced its first 3 clusters of flowers. Last spring it produced 26 clusters mostly on the lower branches, I look forward to the day its covered with flowers.

I cut the fruit off so that all its energy goes into producing better ramification and hopefully more flowers. 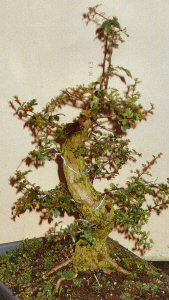 Hawthorne one year after collection