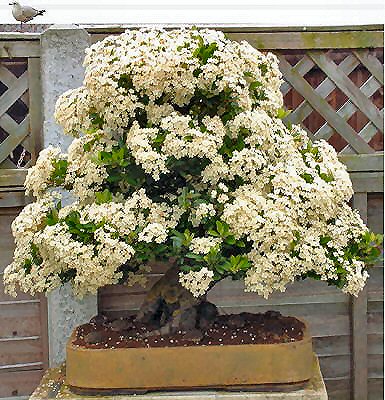 This tree was grown from a cutting taken in 1980 and planted to grow up the side of a house. In 1995 it had grown too large and it was decided to take it out. There was no care  taken in digging it out as it was only afterwards that it was realized that it might make a good Bonsai. It had hardly any roots but this didn’t prove to be a problem, it budded up straight away and grew strongly all summer. Over the next five years, as the tree was being trained, any flower that appeared was cut off so that all the energy went into branch development. 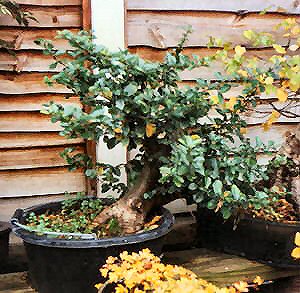 The picture above was taken about 6 months after it was collected.

The Pyracantha is only allowed to flower every other year, this produces a good even flower cover  as shown in the picture at the top of the page.  Other years the flower buds are cut off as soon as they are large enough to see. Re-potting is done in the years it is not allowed to flower and it is potted in pure Acadama. It is fed with Chempack No 8 at least 4 times a week, at quarter strength, as directed on the back of the packet . The tree has only been allowed to set fruit once because afterwards it looked very unhealthy, with yellowing leaves etc. I think the only answer, if I want to allow it to fruit, is to step the pot size up to be able to get more food and water in to it.

I have found that if you leaf prune all the large leaves, when you can see the first signs of new growth in the spring , then the first flush of leaves are a lot smaller and it gives more room for the flowers to open . 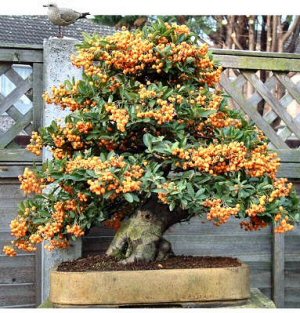 The above picture shows the tree in full fruit.