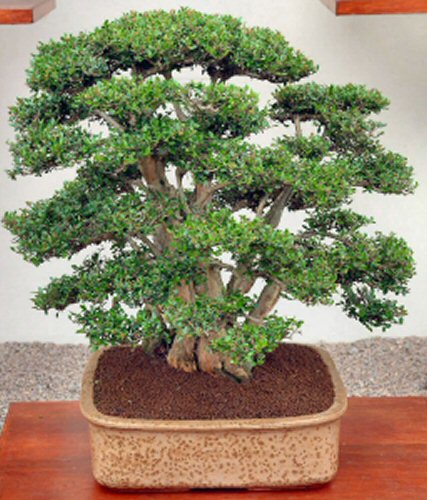 This Lonicera clump was collected from a hedge at a condemned hospital in 1991. It was joined to a big trunked Lonicera which had fallen over and a large branch had rooted its self to the ground to form a raft. In the gap left after it had fallen it looked as though a lot of new sucker growth had sprung up and eventually fused together to form a tangled clump.

It was the Lonicera raft that I wanted, not the tangled clump of growth by the side of it. This clump was ripped off and discarded and it was not until I started to clean up much latter that I noticed one or two nice trunk lines in this tangled clump. After some careful pruning I ended up with a nice bonus for the days work – the clump stile bonsai shown above.

The Lonicera is planted in Akadama and is fed with quarter strength Chempak No 8 several times a week when it is growing actively. In the spring it has insignificant flowers which later on in the year produce mauve berries,  these are usually hidden in the foliage. 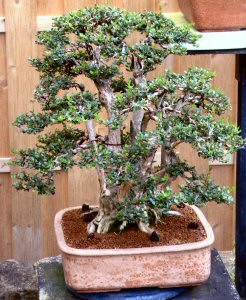