In 2008 following a trip to Lodders bonsai in Holland where I purchased 5 small Chinese Elms I decided to take on the task of trying out a group planting. Here is the story so far…. 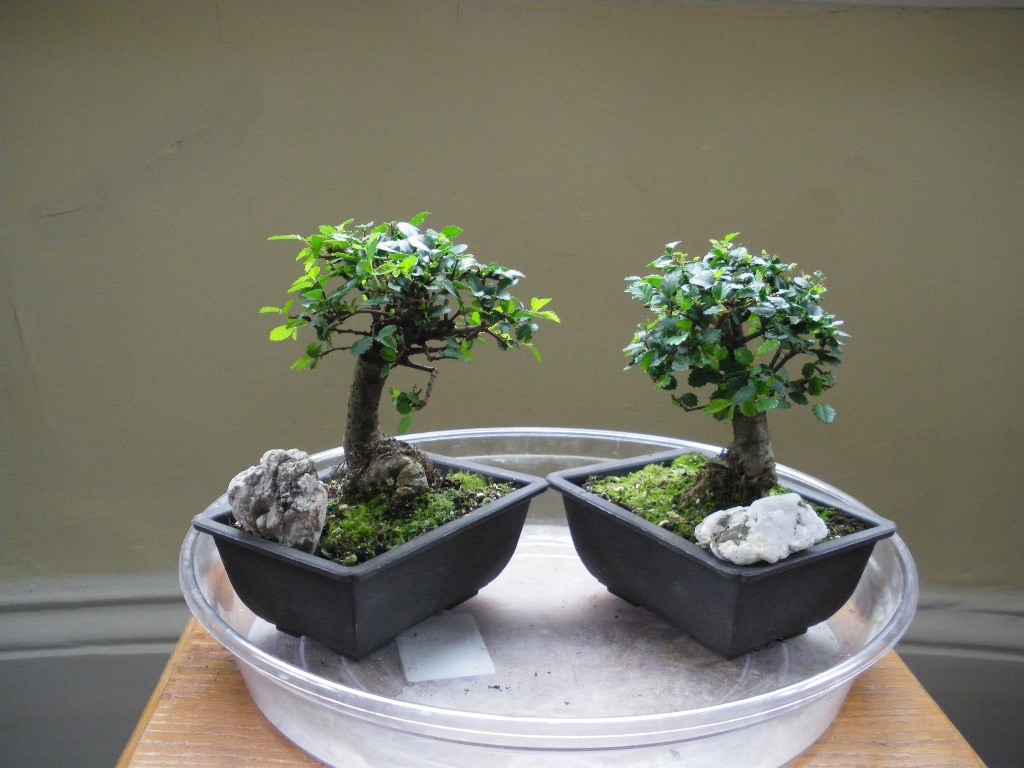 Examples of Chinese Elms purchased in 2008

This is an example of the small Chinese Elms that I purchased in February 2008. They cost around £2.50 per tree and came in small plastic starter bonsai pots. The trees were single trunks which had been cut of quite harshly at the top and a new crown was forming a broom style with many branches from around the cut point. When I was selecting the trees I tended to look for trees with slanting cuts as opposed to straight cuts as this is more natural. In March I removed all the small Elms from their pots and also removed all the existing soil from around their roots. I then examined their roots and trimmed off excessively long and crossing roots. I then formed a root ball out of a clay/peat mix to aid with holding the trees in position. I had already purchased a suitable bonsai pot at the time with the Elms and prepared this with wires and mesh to aid with tying the trees into the pot. Once the root balls were ready, I also worked on the tops after positioning the trees and could prune off branches to aid with interlocking the canopies at this early stage. I used Edo bonsai soil mix when potting them up. 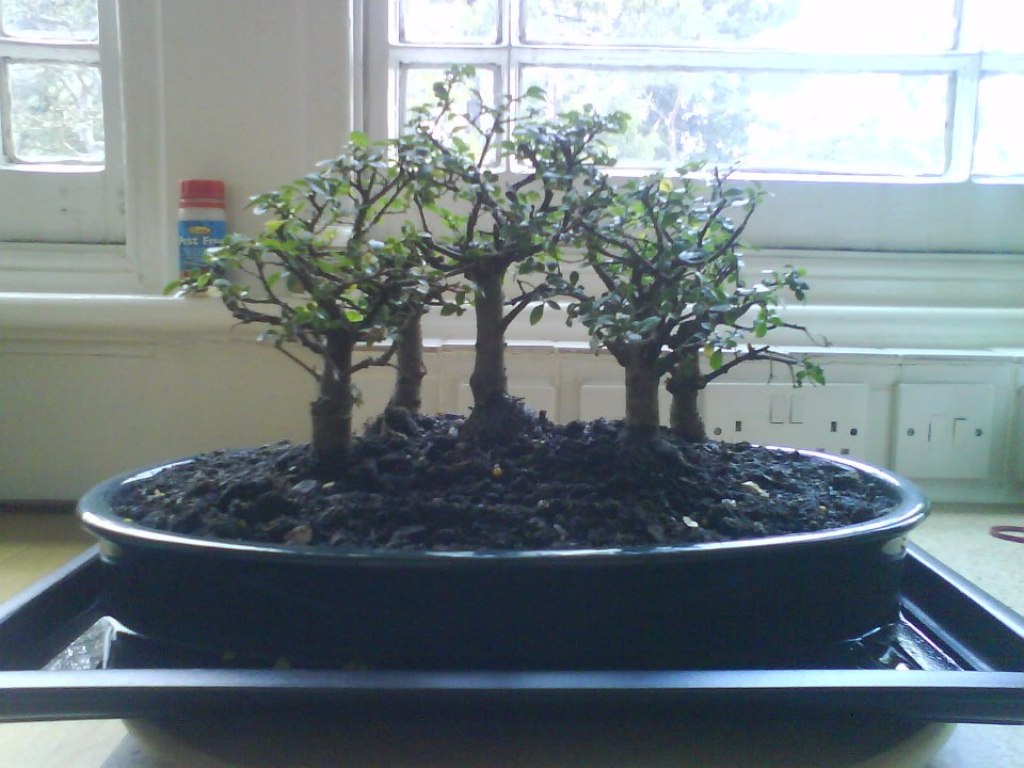 Starting off a group of 5 Chinese Elm

I then left the group to establish. At this point I will mention that I chose to keep the group indoors as they are versatile species and cope with higher temperatures all year round and are not fully frost hardy. Also because I live in a flat, it meant I only had the option of keeping them indoors. I placed moss over the top of the soil to aid with keeping a higher level of moisture and they sat in an easterly facing window. A year later in February 2009 they had continued to grow and develop, and retained their leaves throughout the winter. They continually shed leaves but never fully defoliate like in autumn as the conditions stay continuous. I was pruning the leaves back to two pairs very regularly around once a week at this stage so it is an ideal species to practice on and very forgiving as it grows back regardless!

In February 2010 I re-worked the crowns of the group as I had let them go slightly and I also removed all the moss from the soil as it was causing the bark to become overly moist and I was concerned it may cause the bark to rot. The group are very heavy drinkers and need watering daily and I use rainwater as the tap water is very hard and leaves a calcium residue on the leaves. The branches are slowly becoming more ramified and the canopy structure is more dense now and starting to look more compact. I continue to prune back to two pairs of leaves on each branch or shoot and this aids with back budding and still on a very regular basis i.e. monthly. The group have been on a liquid feed (Tomorite) but not to any specific regime but at periodic times of watering and I have also added slow release fertiliser (Osmocote) into their top soil. I tend to feed more heavily in the spring and summer months and allow the trees a rest period over the winter. I have yet to try a full defoliation of the group which I should do if I continue to keep them indoors. One of the downsides to keeping them indoors is that you do not then get the great display of autumn colour as they stay dark green all year round. Also it is important never to let them dry out as they tend to suffer crown die back if this occurs and can even die totally. 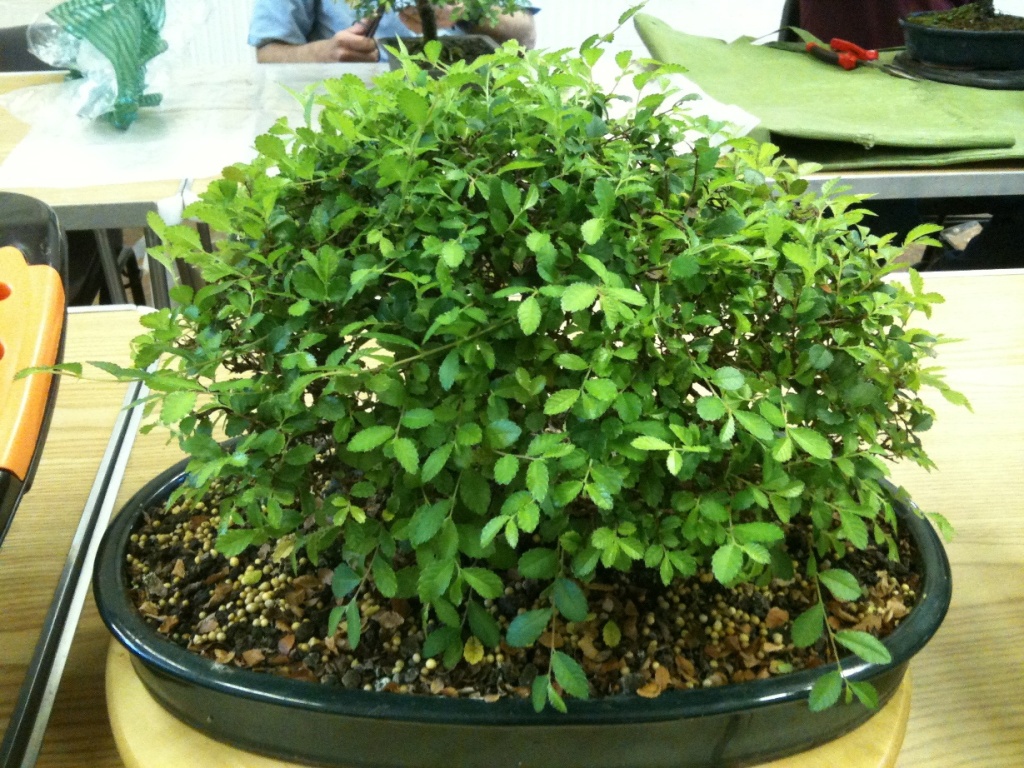