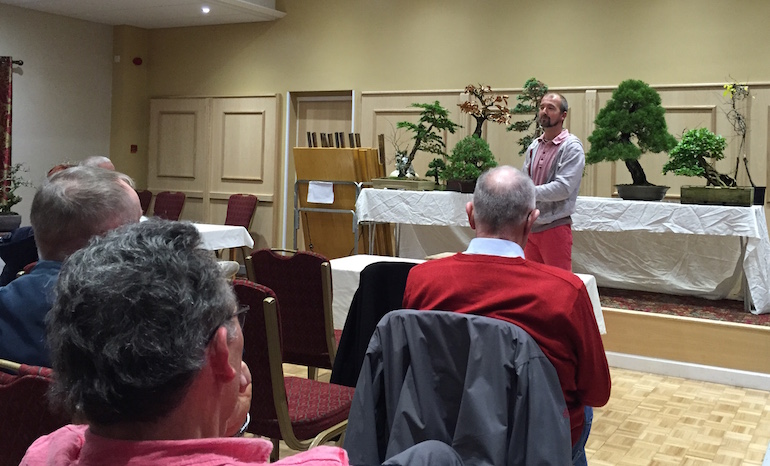 Simon Temblett brought a series of his own bonsai trees in for our monthly club night and talked through his approach creating some fascinating works of art and stunning bonsai. He has over the years created very classical bonsai for which he is well known for, these he has created from raw material or garden centre stock and he is proud to have grown his trees with this process rather than buy a ready made bonsai. 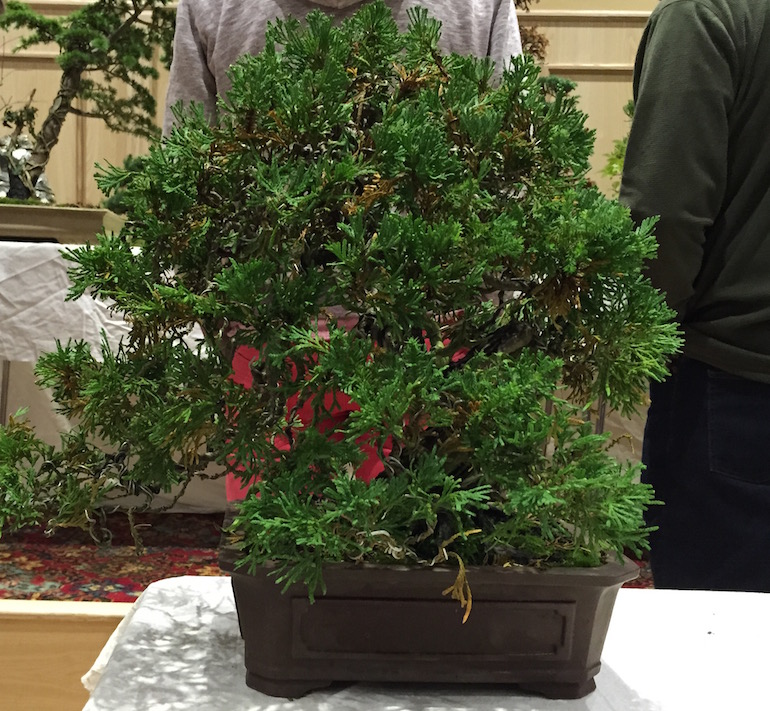 He started the evening off talking about his Western Red Cedar (Thuja plicata) exact cultivar unknown. He commented that on an annual basis this tree tends to suffer from shedding and a large amount of die back so something to watch out for as it tends to only then fill out slowly. He has been working on this tree for around thirty years and it is styled on an image he has of old Cypress trees. It produces a prolific amount of flowers each year.

He finds it hard to control the foliage and it doesn’t seem to back bud well so he folds the branches down following their natural arching and wires them in place for the image. He has created some jins and the proportions of the tree are about right but it will need a small amount of reduction. He feels the nebari is one of the best features of the tree and has not fully decided on a set front. 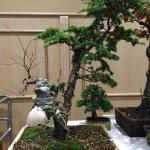 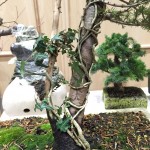 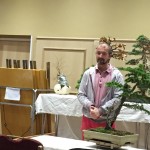 The second tree he discussed was a Cedar (Cedrus) that he has developed from an air layer taken after growing some cedars from seed after finding a cone with germinating seeds in it. He field grew the seeds until they developed into around 8ft high trees and then air layered one of them. He feels it was not great starter material and this is the only one he kept, but the tree does have a few striking features. At some point an Ivy naturally started to grow in the pot with the Cedar and he has now incorporated this into his design for the tree and has been encouraging the Ivy to grow up the trunk of the Cedar.

In hindsight he feels that it would have been more distinctive on a broadleaved tree so it stands out compared to Ivy on a conifer but he is continuing with the design. He uses drawing pins on the trunk to move the Ivy stems into position and this is his tribute or homage to Ivy, he feels it is an important component of the natural ecosystem. He has been fascinated with Ivy for sometime due to the diversity of the plant, it has so many variations on the shoots from climbing shoots to flowering ones to rambling ones.

He has continued to prune the Ivy shoots, mainly the strong ones and this has aided in reducing the leaf size of the Ivy – he also defoliates it. Long term he would like to create a pad of Ivy on the opposite side to the Cedar pad so the tree becomes half Ivy, half Cedar – and this is again based on an image of a tree he recalls which was a cross between an Oak, Birch and Rowan in Capel Curig, Wales. 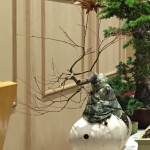 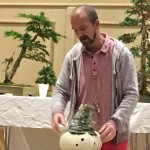 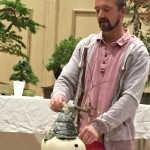 Another project Simon talked about was a Maple (Acer) which he had started growing in a drain pipe to create a root over rock style. However, after removing it from the drain pipe the roots have not quite developed in the form required so in the last year Simon has placed the tree over a ceramic pot and is developing the tree in an ‘out of the pot style’. It will definitely be interesting to see what happens to this tree and its pot, over the next few years. 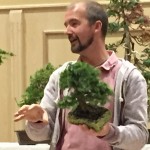 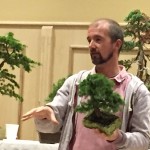 Simon has a very artistic flare as well as sculptural, he has created his own pots using a range of materials and one of them was either tufa or travertine. He has used this pot for a collected Sitka Spruce he collected from a lead mine in Wales.

This tree is about ten years old now and has proved to be very healthy and vigorous developing roots into all the cracks and holes within the pot, aided in cracking the pot but due to the roots being intrinsically linked to the pot, it will not be possible to re-pot the tree in the existing pot by the sounds of things. 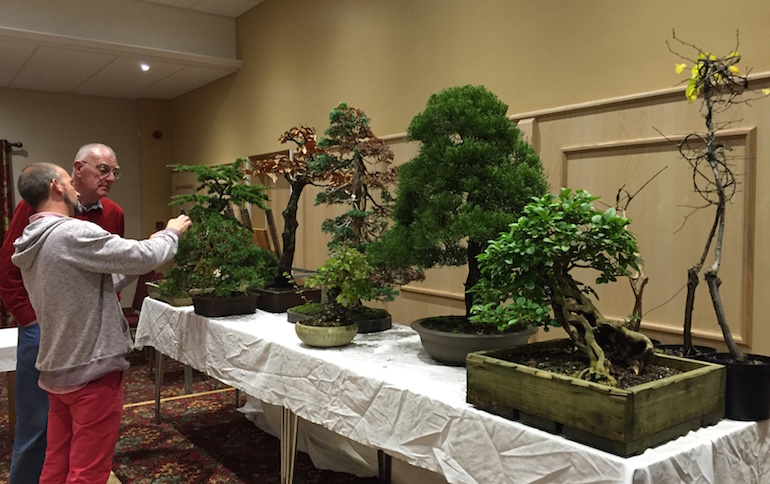 The whole evening was both very interesting and inspiring, I wanted to go home and re-look at some of my trees to see if I could re-style them and to think outside the conventional bonsai box, which is great. I have already been experimenting with different species and approaches to growing them which is great fun – the way the hobby should be.

Simon also talked in detail about some of his other trees and they will be featured in some follow up posts, watch this space…