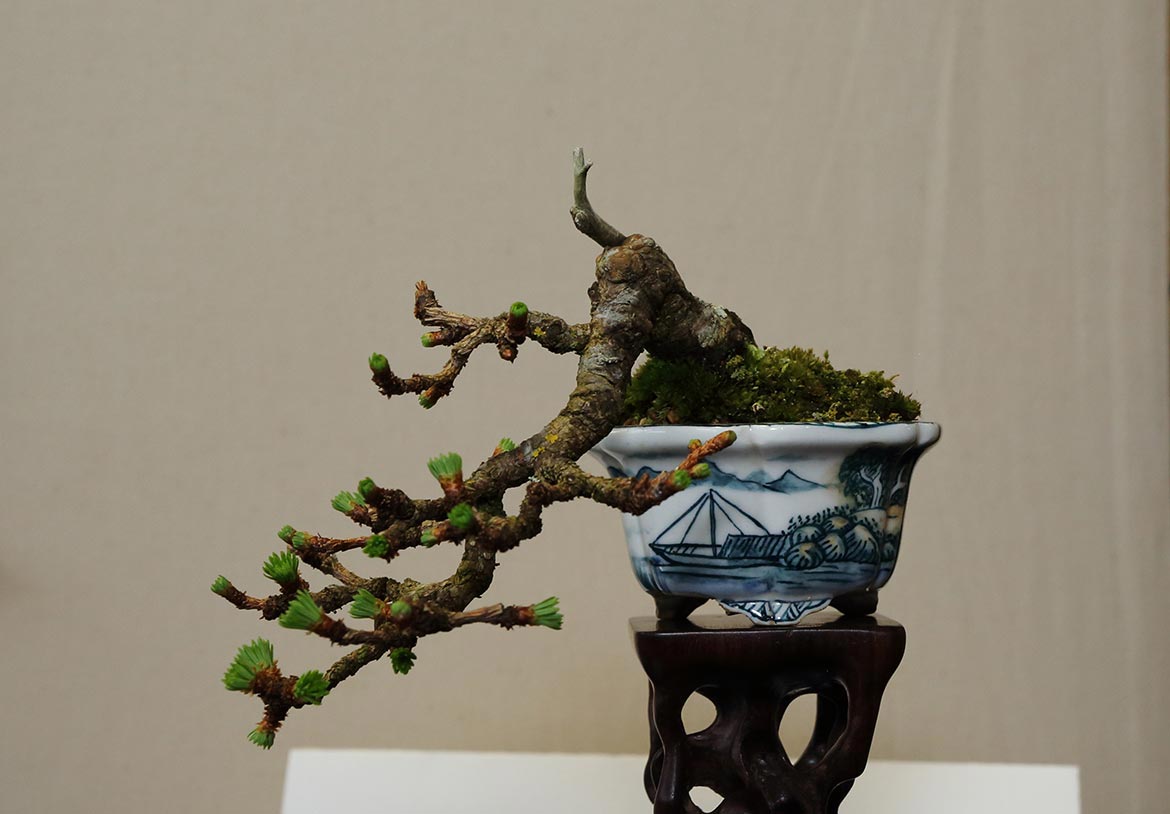 The premier UK shohin and mame bonsai tree exhibition took place on 15 March at Failands Village Hall. This much anticipated exhibition, Shohin UK II, was eagerly awaited by many in the small tree community. This is the second to be held by British Shohin Association and it was a complete success with many commenting on how improved the trees and displays looked. This does not take anything away from the trees in previous events but is more a reflection of how far the understanding of shohin and mame trees has come on in recent years and also how the aesthetics of showing are becoming more understood in this niche of bonsai displaying.

There were many trees on show, all of them of supreme quality and at 8.30am on the Sunday morning they were tentatively being moved from car to hall. With these little trees one mistake, one accident in transportation or a trip can ruin the whole image. There is no place to hide – lost branch equals lost image and a tree that cannot be shown. Disaster! This did not happen though and all trees came through the scary transition from home to hall without any damage.

Once the trees were brought in the frantic lining up of trees, scrolls and accents took place. The hall reverberated to the groans as old joints creaked and cracked when bones were bent into unnatural positions as the owners knelt and climbed to ensure everything was in the correct position. Furtive glances left and right to see what the competition was doing. Final touches ensued where exhibitors moved items a tiny amount to calm the feeling of doubt that the tree looked better where you put it two minutes previously. Whilst this was going on the traders quietly laid out their stalls. Eventually all was done and the exhibitors could grab a cuppa…and relax. Time to catch up with others and renew friendships.

Wandering around the tables showed that those involved in the smaller side of the bonsai obsession took just as much time and care over the trees as did those for the larger trees. What also stood out was the wide variety of tree types on show with both evergreen and deciduous being well represented. Whilst shohin and chuhin sizes were the main sizes present there was a good selection of mame displayed too.

Judging took place during the morning with many people with clipboards and tape measures wandering around squinting and looming over trees and displays. The judging system used was based on a Belgian system where those examining the trees listed their favourite three trees or displays in order of preference and a points system decided those to be awarded prizes. Several trees also had judges declaring an interest and they were then barred from judging those trees they declared on. This system worked well. On two trees the judges had marked them equally so they had to be re-examined to decide which one deserved the win – a very close race indeed.

The results of the judging is as follows: 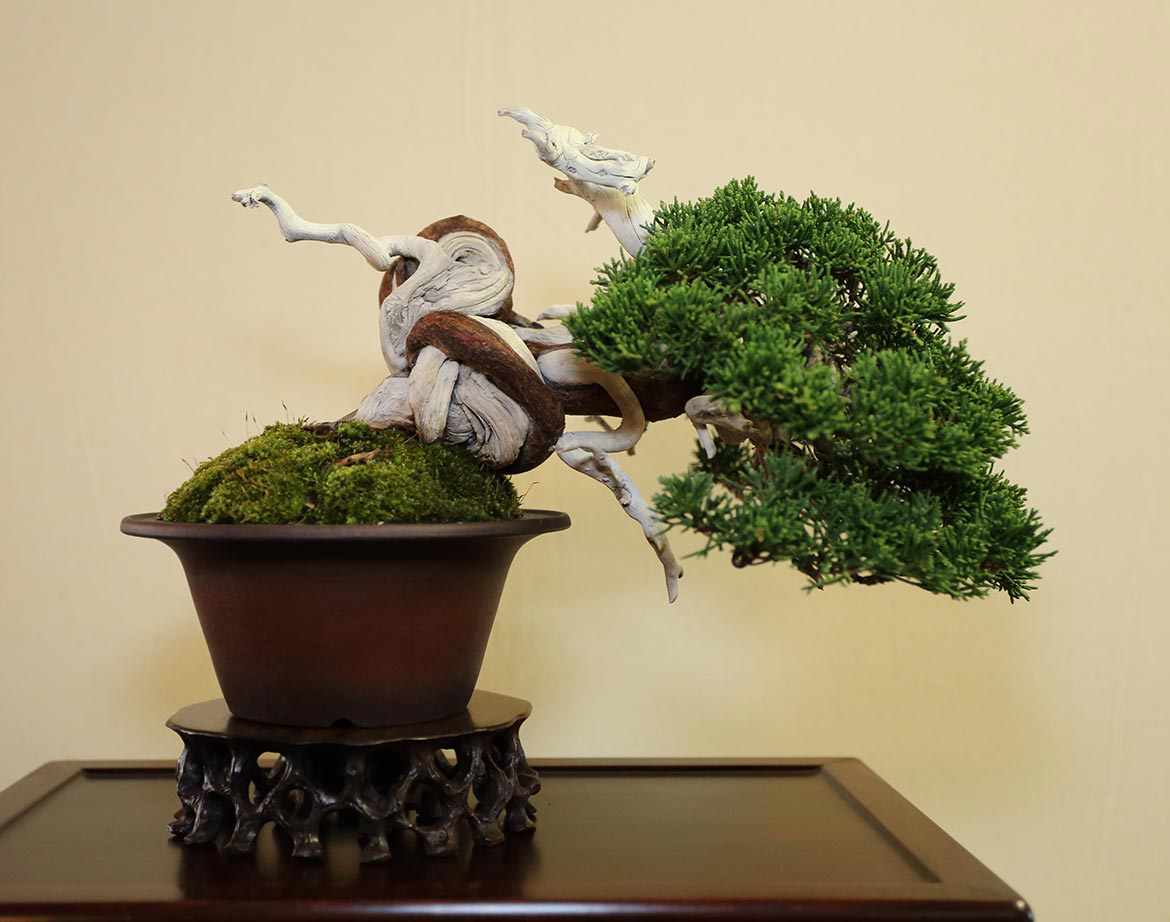 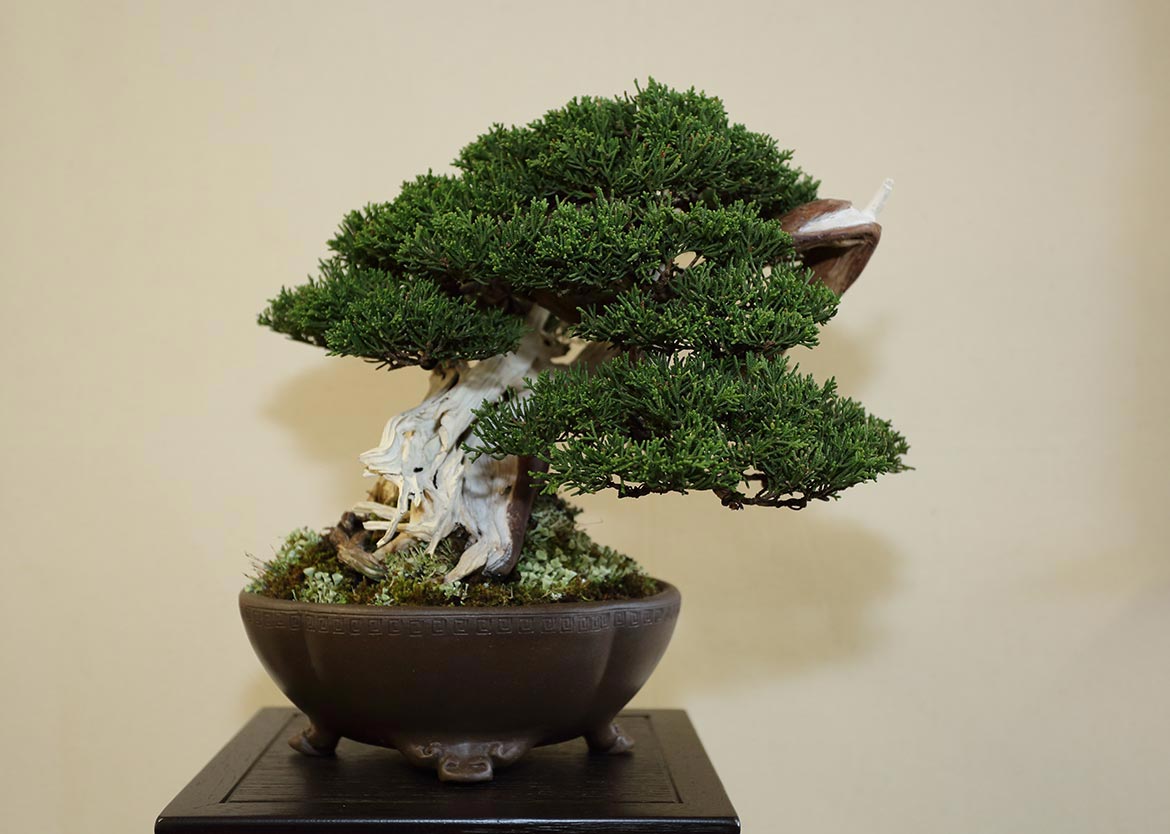 Later on in the day there was an auction of trees, pots and tools to help rebuild a collection that was recently destroyed in a fire. Bonsai generosity at its best. It was also noticeable how many Paul Goff scrolls were used in the displays – a great way to remember this talented individual who was taken away far too early.

Traders showed a good variety of products with Stone Monkey bringing many new and colourful pots particularly suited for this smaller corner of trees, including pots that were recently displayed at this year’s Gafu-ten bonsai show in Japan. Ian Baillie also provided many options for the undecided with a selection of his own pots and some he had brought back from a recent trip to Japan. Esoteric Pots, Walsall Studio and John Pitt also added variety to the mix. Many beautiful suiseki, tables and pots where brought along by David Sampson. Those wanting to add to their tree collections where well supplied by Bonsai@16 and Windybank Bonsai. Ritta Cooper also had accents, Japanese pots and kusamono available including a very good rose that was snapped up early. Bespoke Bonsai Stands brought along well sculpted and constructed stands, jiita and ne-taku displays.

*Credit to Mark Cooper for photography.

Finally it is with great respect that Kit Bowns dedicated his Best Mame Tree award to the sadly, recently departed Anand Arihato – a great bonsai designer and mentor.