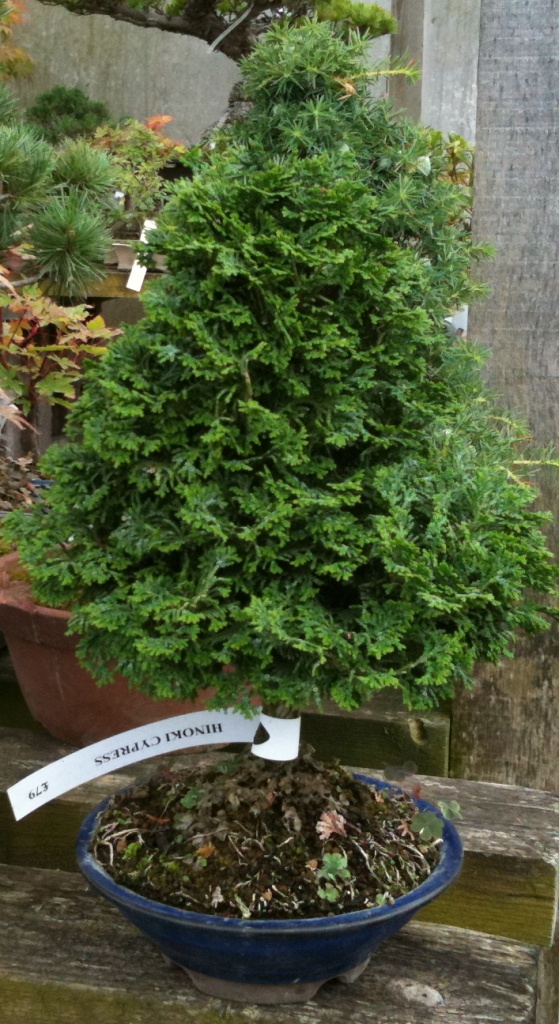 Japanese cypress or Hinoki Cypress or false cypress (Chamaecyparis obtusa ) is a species of cypress that is native to central Japan. It is an important timber tree and is considered sacred by Shintos. It comes from the family of Cupressaceae which is part of the False cypresses. The genus is Chamaecyparis and the species is Obtusa meaning blunt leaves. In June, a club night was devoted to working on Hinoki cypress and a brief video showing work in progress is posted below.

Hinoki cypress are of a large broad conical tree form with a very slow growth rate but can attain an impressive 35 metres in the wild. They have an attractive dark red-brown bark, which can be seen peeling off in narrow strips as it ages. 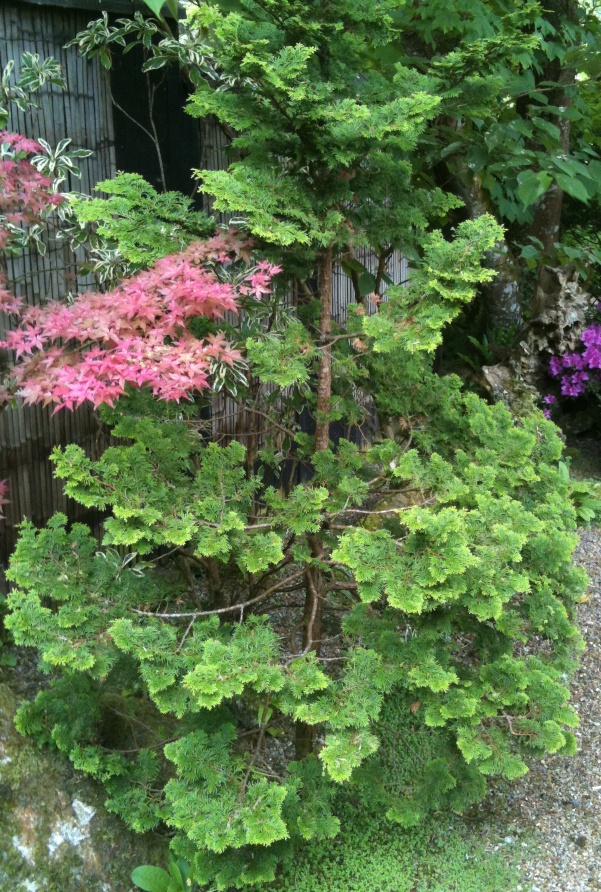 Hinoki cypress growing in a Japanese Garden in Cornwall

The foliage is arranged in flat short sprays of a scale like nature 2-4mm long, blunt tipped (obtuse), dark green in colour above and green below with white stomatal lines underneath at the base of each scale lead. 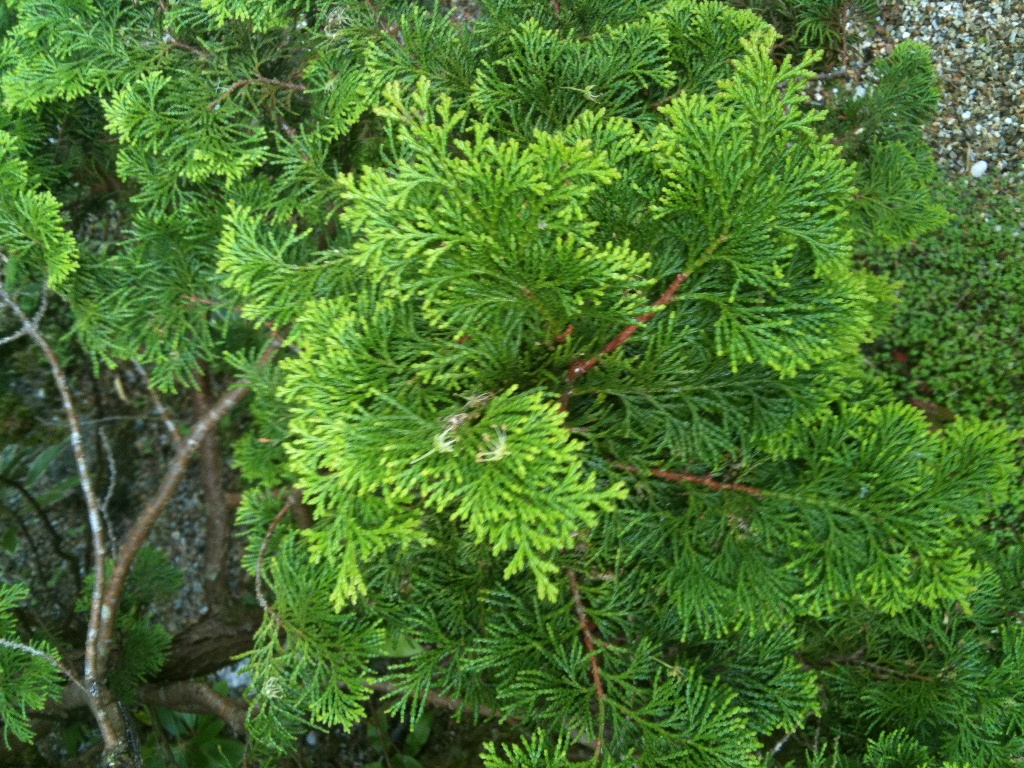 The cones are solitary round (globose) and the seed-bearing part, and 8-12mm in diameter with 8-12 scales arranged in opposite pairs held on short stalks. They are highly adaptable trees able to cope with extremes of heat and drought when in the wild naturally, but this changes slightly when kept for bonsai or as container grown trees.

They make an excellent tree for bonsai and are often referred to as Dwarf Hinoki Cypressess, and there is a great range to choose from.
• C. obtusa ‘Nana Gracilis’ (can be prone to losing inner foliage easily which it does not replace)
• C. obtusa ‘Yatsubusa’ (b) are of particular use due to their naturally more compact growing habits.
• C.obtusa ‘Kosteri’ • C.obtusa ‘Nana Densa’
• C.obtusa ‘Nana Lutea’ 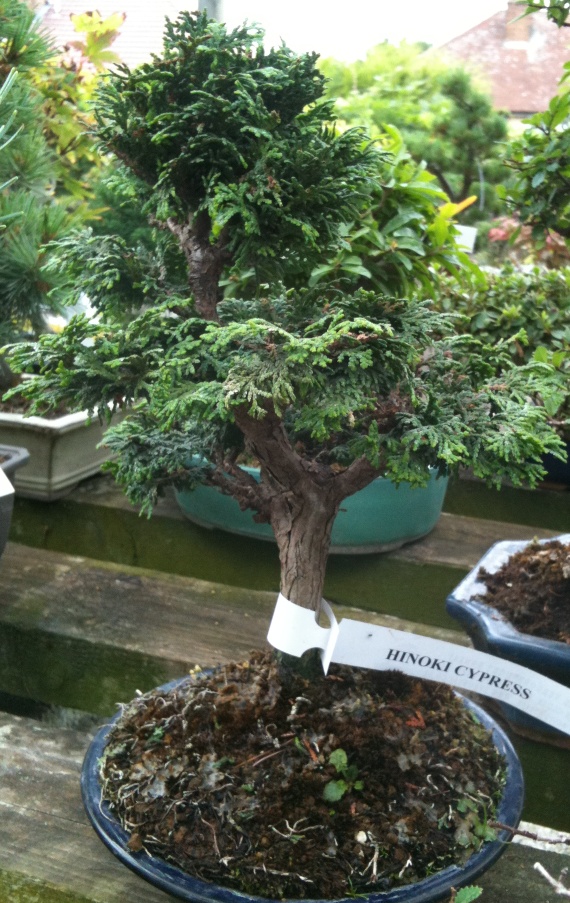 Close up of the trunk of a Hinoki cypress bonsai

When pruning for bonsai one should never remove all the foliage from a branch unless you want a jin, as they don’t usually bud back on old wood or on branches without foliage. Nip off extensions on foliage frills but allow shoots to achieve 2.5cm of growth before finger pinching. However, they require regular pinching to allow the light inside and to the lower branches but do not hard prune in summer as this can cause die back of the exposed inner foliage.

Wiring Hinoki cypress is relatively straight forward as they are considered easy to wire, but branches may take a while to set. As they are conifers on way to aid moving a large branch is to make a sharp longitudinal cut with a knife on the underside of thicker branches to increase its flexibility. However, ensure to wrap the branch with raffia and fix /hold in place while it develops a callous and sets in position. 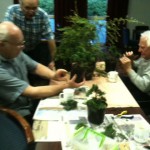 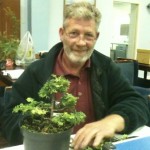 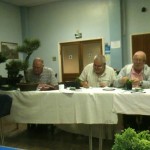 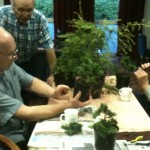 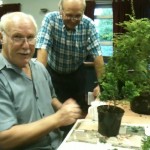 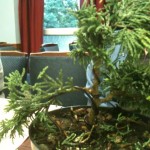 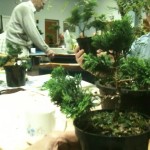 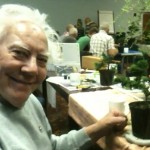 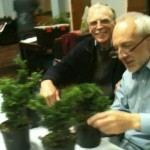 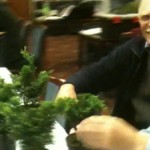 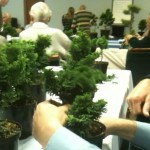 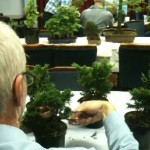 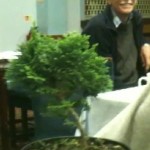 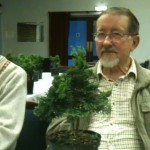 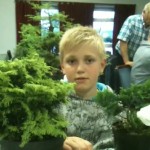 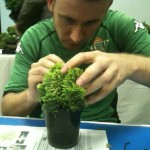 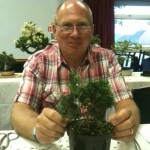 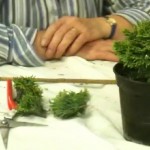 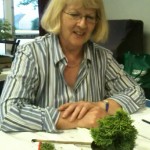 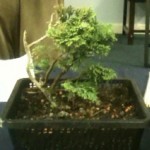 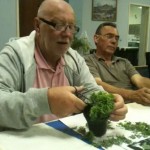 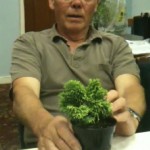 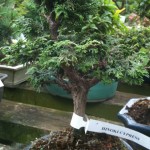 Close up of the trunk of a Hinoki cypress bonsai 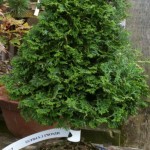 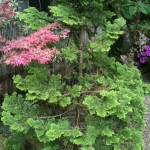 Hinoki cypress growing in a Japanese Garden in Cornwall 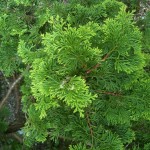 Summary table of tips for keeping our Hinoki Cypress bonsai

Spring
Transition period keep them on a covered porch or area until temperature increases and to avoid late frosts to prevent frost burn on foliage sprays.

Position
Full sun, must be protected from strong wind particularly during the Winter.

Light & Air
Full sun is important but they will cope in light shade, but without plenty of light, their inner branches will die back.

Watering
Require high moisture levels but soil must drain well at all time. Mist when possible and never let dry out fully.

Feeding
Avoid fertilisers that contain lime. Feed with a balanced food (organic pellets are good) from spring to mid-summer and again from late summer to autumn. Slow release reliable form of feeding for Hinoki Cypress.

Re-potting
Annually or every other year, depending on the growth rate.

Propagation
Cuttings can be taken from young wood in late summer to early autumn. Cuttings root readily. Can be grown from seed, but need cold pre-treatment and may take up to a year to germinate. Veneer grafting can be used in summer (is a method used for stocks larger than 3cm in diameter). Air layering in late spring.

Styles
All styles except broom.

If you are looking for a good source of Hinoki Cypress or any other conifers contact Mark Harvey of Swanborough Conifers at Nursery Farm, Woodborough, Pewsey, Wiltshire, SN9 5PF or on 01672 851111.

Also John Trott of Mendip Bonsai has a good range of both broadleaf and conifer bonsai stock so visit his website here for further information.