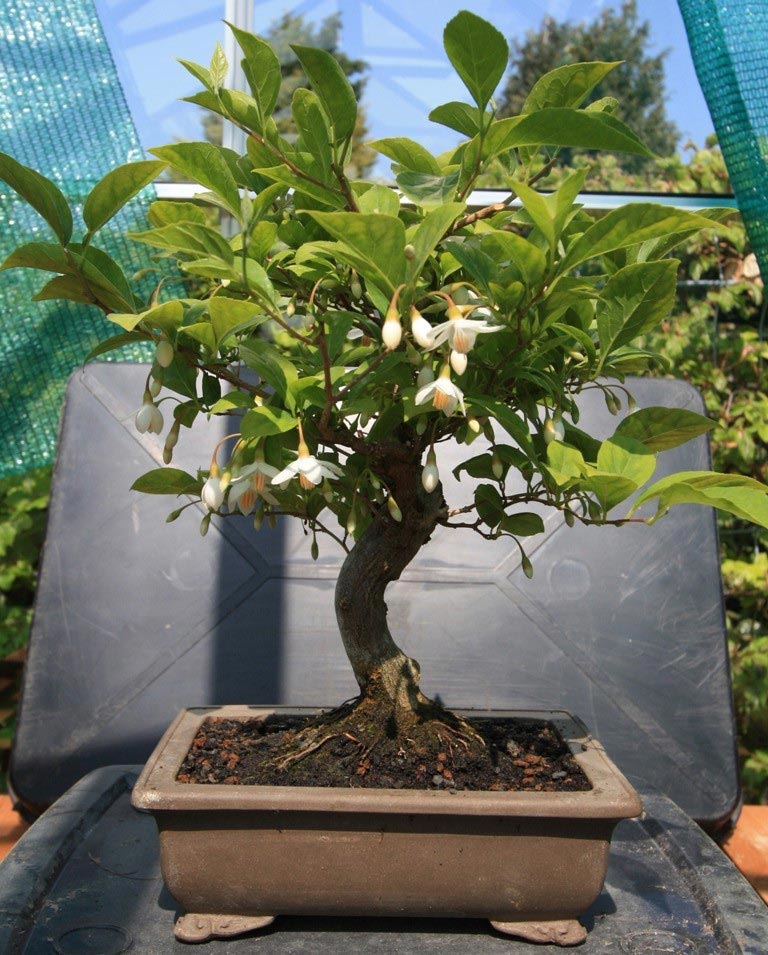 This is a great tree for bonsai and it is fantastic currently as the flowers have opened early and we are rewarded with a great display of white delicate flowers. This is one of a few of this species of tree that we have bought as bonsai in the last few years and have recently been working on training some larger nursery stock that we bought with good success so far. The Latin name, Styrax japonica, is known commonly as the Snowbell tree with its origins from south-east Hokkaido to throughout Japan and belongs to the family Styracaceae. This family contains around 130 species of Styrax within it and the majority of plants are large woody shrubs or small trees.

Example of a young Styrax in a garden

This particular Styrax is usually a small tree with a low fan like branching habit and one of its most distinguishing features are the fabulous pendant bell-shaped white flowers. We have overwintered our Styrax in a greenhouse so one is flowering now in April but the usual flowering time is supposed to be around June. The flowers have bright yellow stamens and the tree continues to provide interest with a fantastic autumn colour. Once the flowers have finished, the fruits develop and these are small and white hence the name snowbell or snowdrop tree. 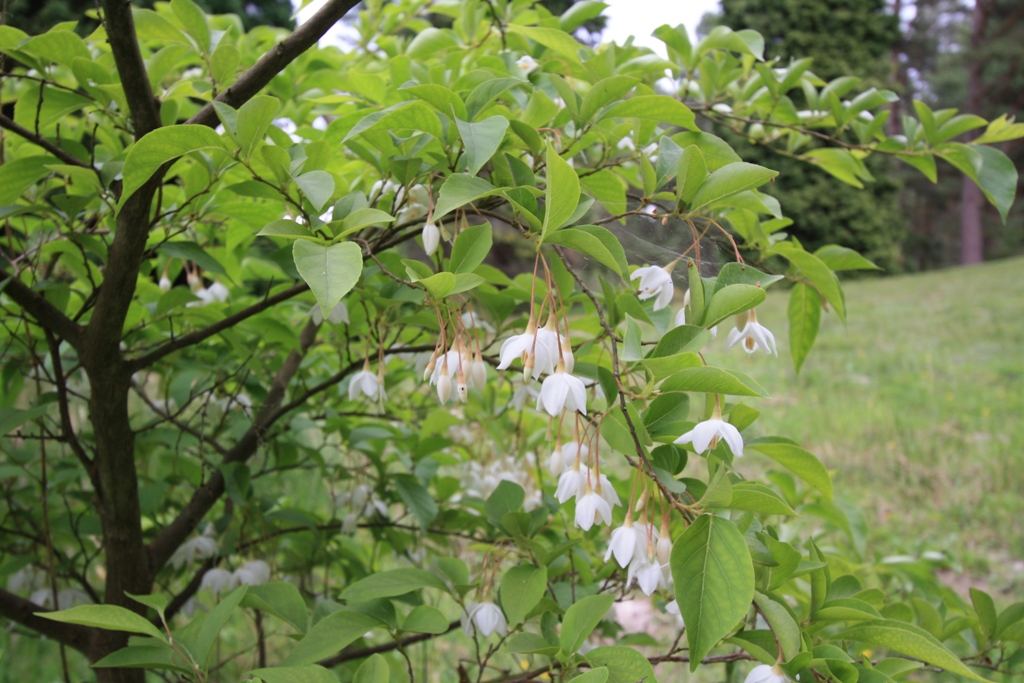 Close up of un-trained branches and flower formation

They need to be protected from the wind and ideally be positioned in light shade as opposed to full sun and importantly protected during the winter as they are not frost hardy and require around 4-8 degrees Celsius throughout the winter. 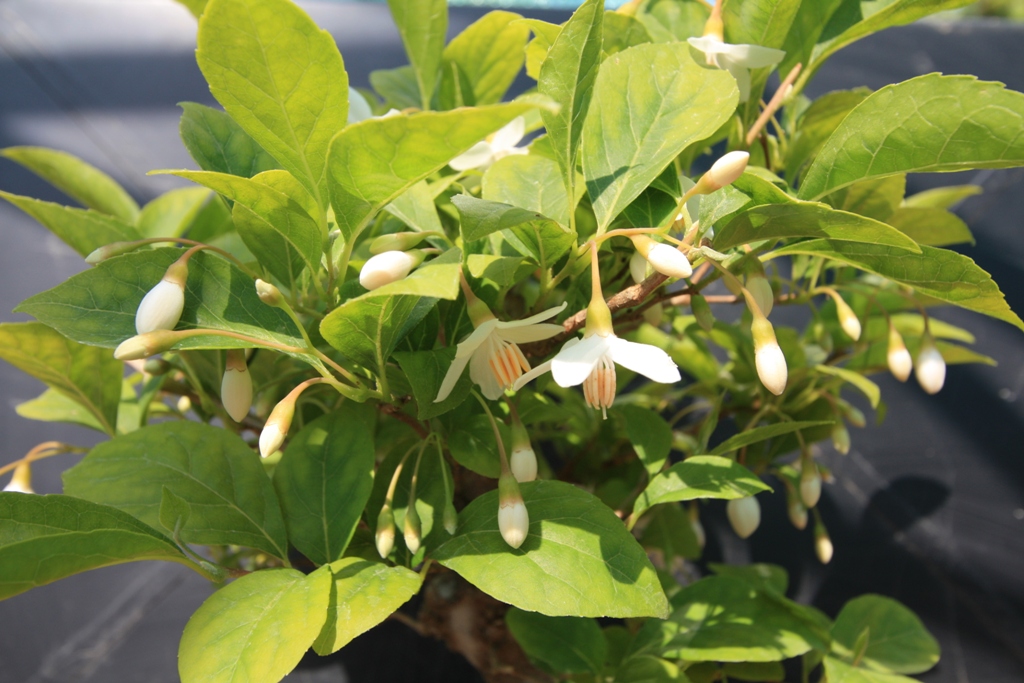 Styrax japonica is a deciduous tree that can be propagated by fresh seed or by cuttings that are taken in late summer and it also does well from air layering. With regard to pruning, avoid until after flowering to ensure that the flower buds remain intact but removal of dead branches can be carried out at anytime. If you need to wire to improve the structure do this during the growing season but again wait until after flowering. Try to wire the branches when young as they are more flexible and can become quite rigid and brittle once they have become woody. Watering should be daily during the spring and summer as they require damp conditions but they should be kept slightly drier during the winter months to avoid root rot. Feed the trees only once they are in leaf and during and post flowering but do not feed whilst dormant. With regards to soil, they require a good well drained soil with plenty of grit for drainage and should be re-potted every two to three years before they come into leaf. They are not prone to many problems except scale and aphids are quite common. 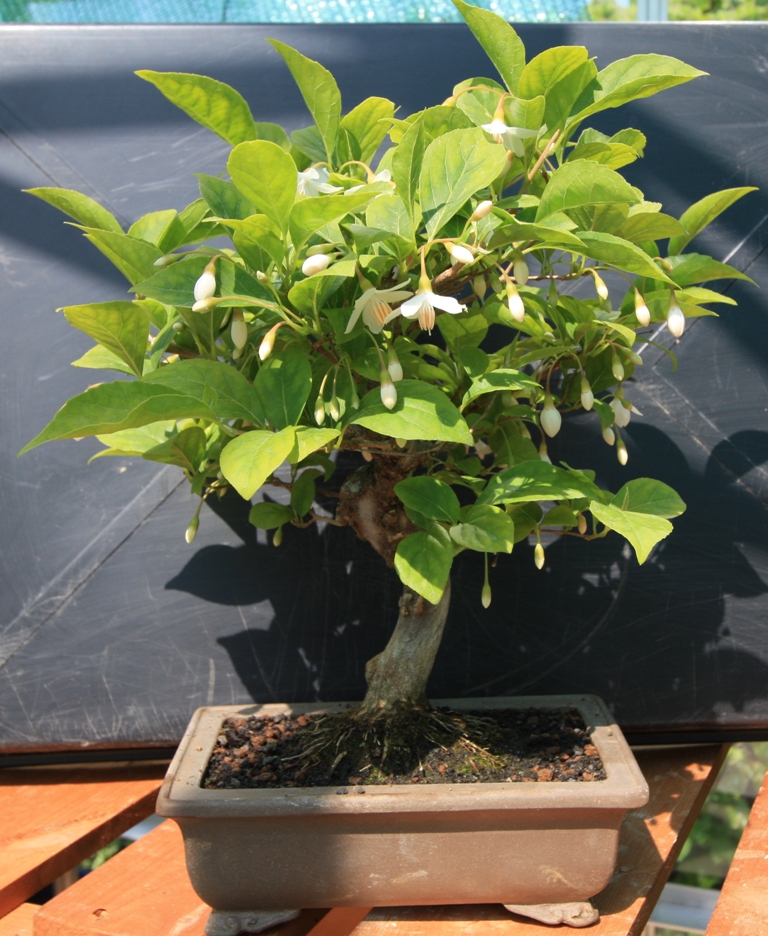 Styrax as a bonsai

With regard to bonsai styles, they make good cascades, clumps and literati styles but are most commonly designed as informal uprights. They ideally should be displayed so the flowers can be viewed from underneath to see them from their best advantage.

There are various sources of Styrax as bonsai trees and as nursery stock, here are a few I know of:
Bluebell Nursery
Peter Chan of Herons Bonsai
Lee Verhorevoort Bonsai
Ken Leaver of Windybank Bonsai
Lodders Bonsai Nusery in Holland