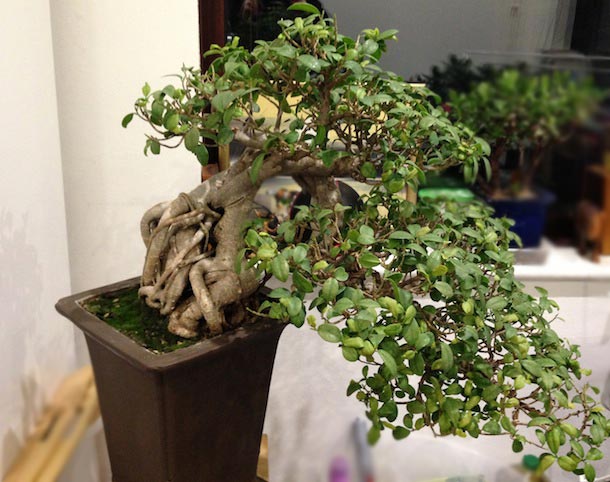 Recently I have been caring for a Ficus microcarpa as it was starting to show decline and leaf problems so I agreed to aid with the recovery if I could as I am used to looking after tropical bonsai trees having a few myself for the past 6 years. 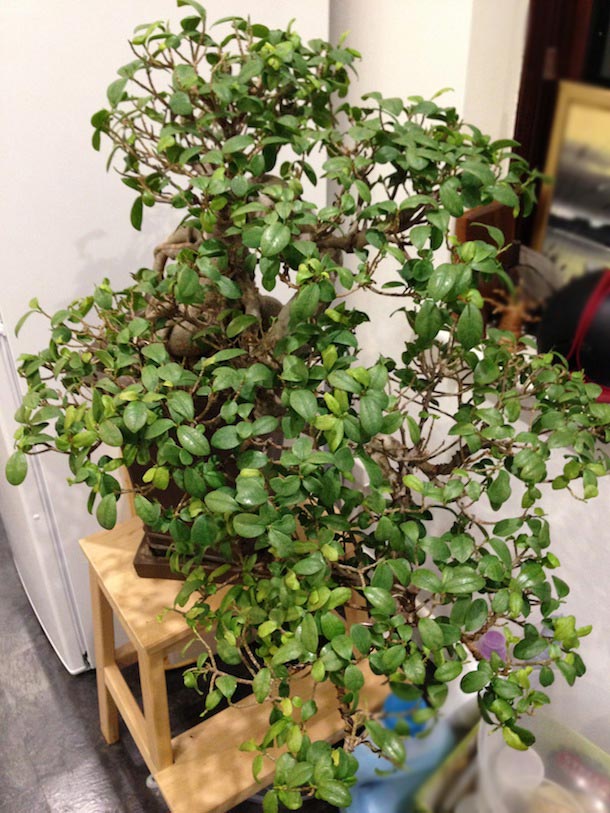 Here are some images of the Fig before I began working on it, it’s leaves had a rusty coloration occurring and upon closer inspection it looked like an infestation of white aphids on the underside of the leaves across all leaves. 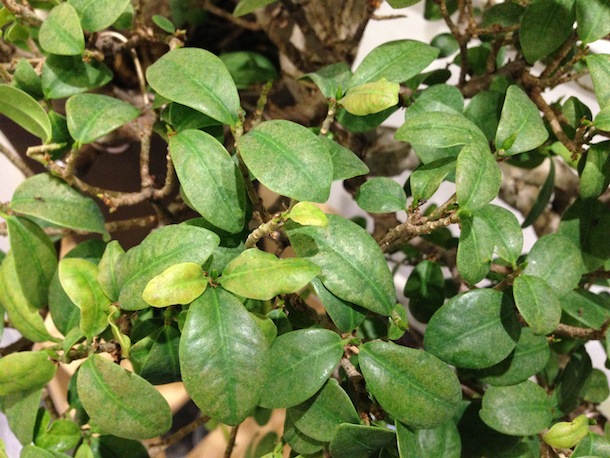 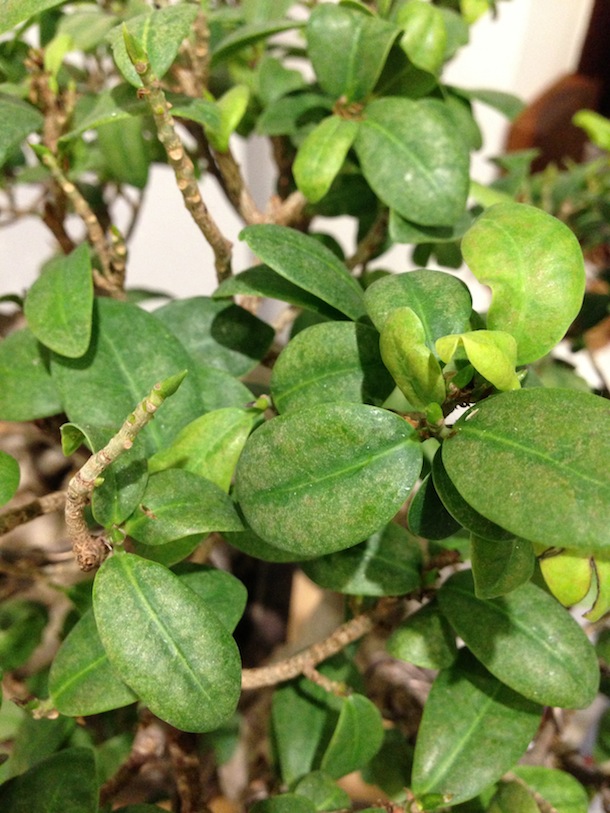 Leaves close up showing rusty like appearance on surface 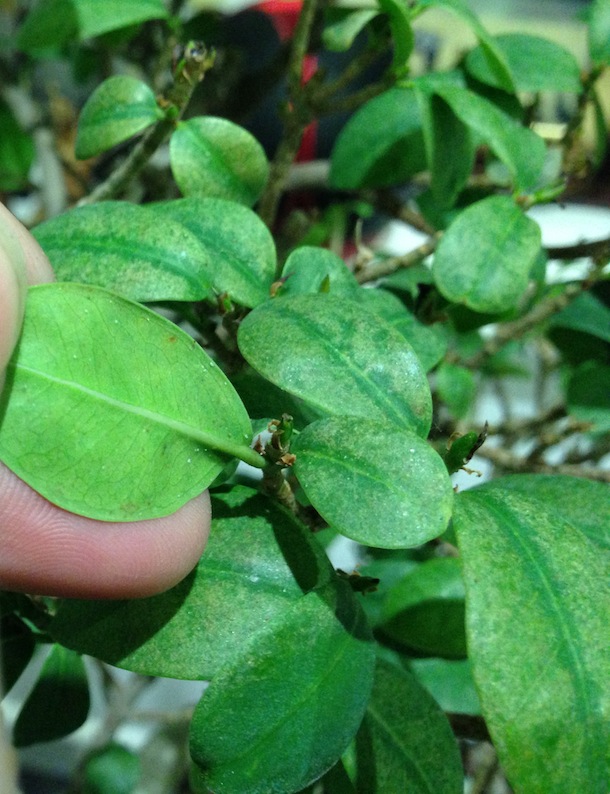 Close up of underside of leaf and white aphids 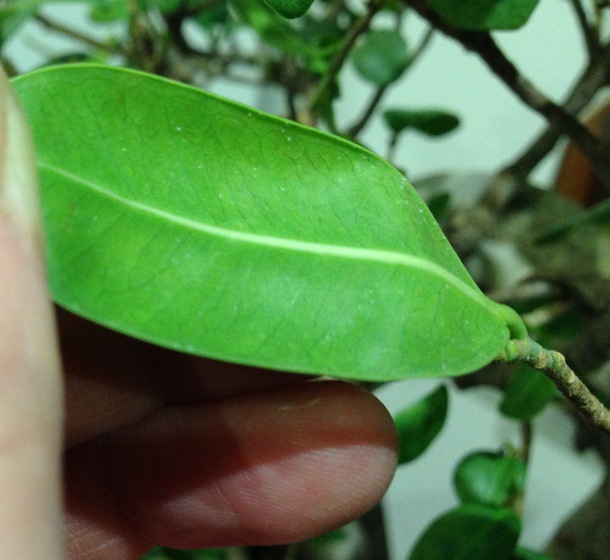 Underside of leaf close up and white aphids

The Ginseng Fig tree was a well developed and established bonsai tree in the cascade style and I have not yet re-potted it but that is phase two following the initial work. It has a fascinating root system, which interlocks and forms a really interesting trunk formation. The leaves should be a vivid green and are oval shaped but had started to go dull and yellow in places as well starting to wilt and curl at the edges more than normal. 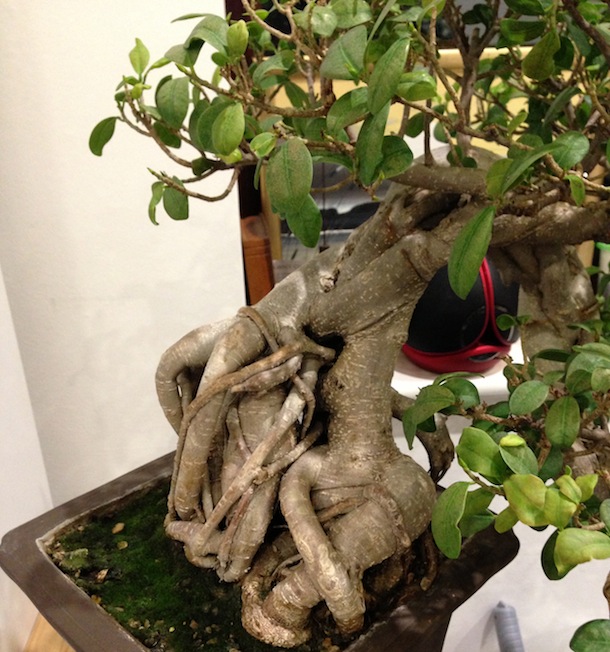 Interlocking nature of the complex trunk of the Fig

So initially I removed all the leaves and carried out a total defoliation. I also removed the wire by cutting it off, which was embedded into the branches in some places and left wire marks. I then gave the tree a minor feed with seaweed and rainwater and left to recover. The drainage of the pot does not appear to be very effective and I can see why additional drainage holes have been drilled into the sides, which I will look into in more detail when I re-pot it. 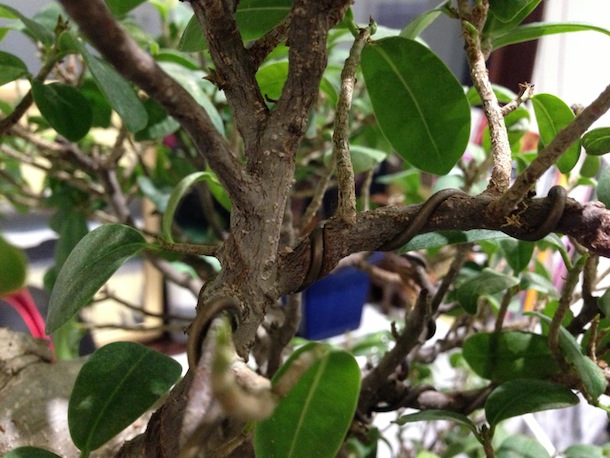 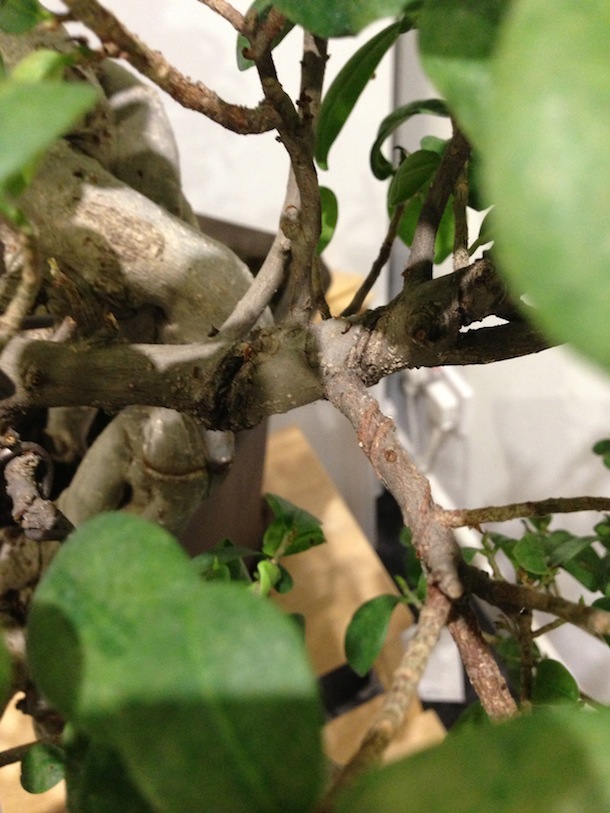 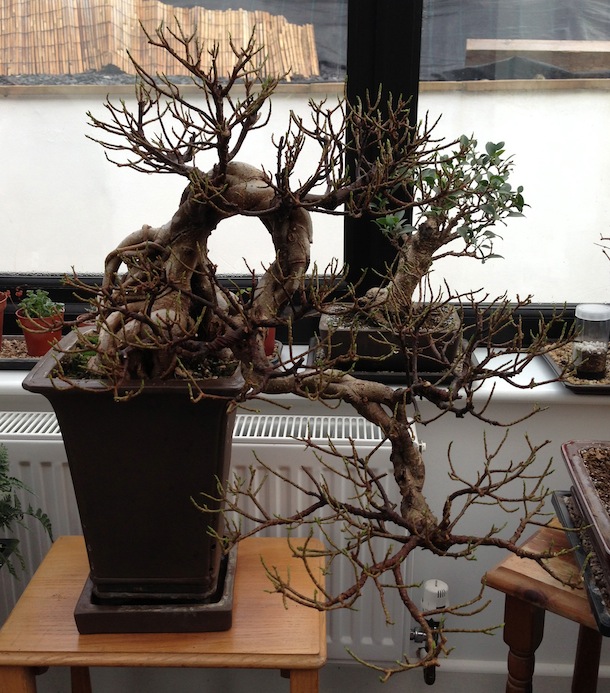 I did not remove the buds though during the defoliation but removed the crossing branches and thinned out the denser areas to improve the light levels to the pads when they come back into leaf. 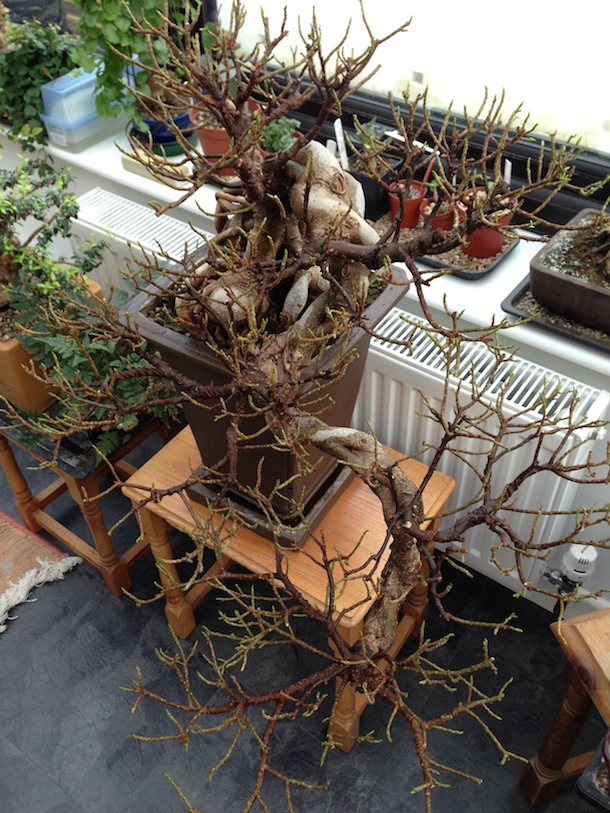 I carried this out in November 2012 when I received the Fig and I can happily say that it is responding well and new leaves are now forming from the buds and they currently appear bright green and healthy and this has occurred within a month since defoliation. I have started to feed the Fig again since the leaves are flushing. It has been watered every other day but only small amounts until it comes back into full leaf. It has been kept in a warm conservatory at a temperature of around 15 to 19 degrees Celsius. 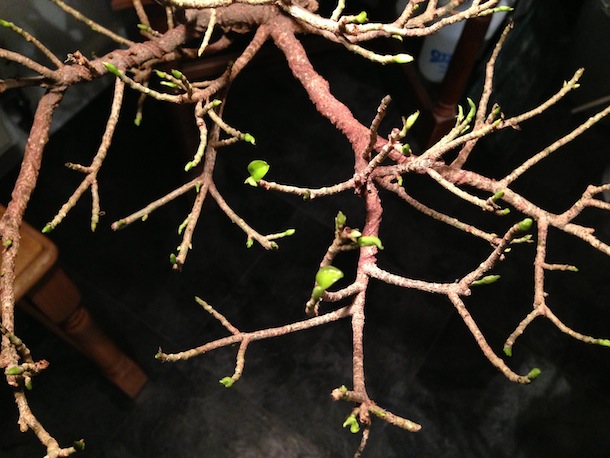 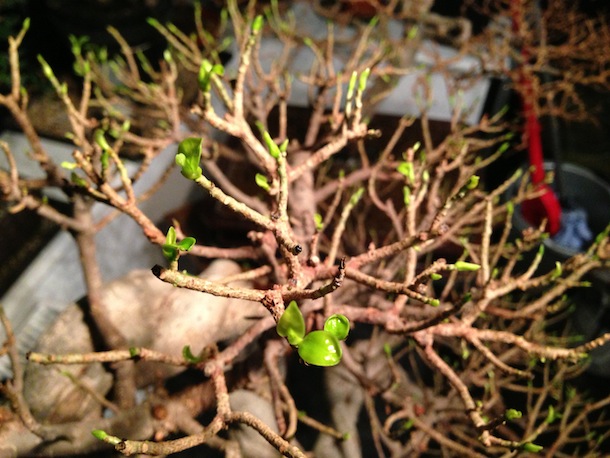 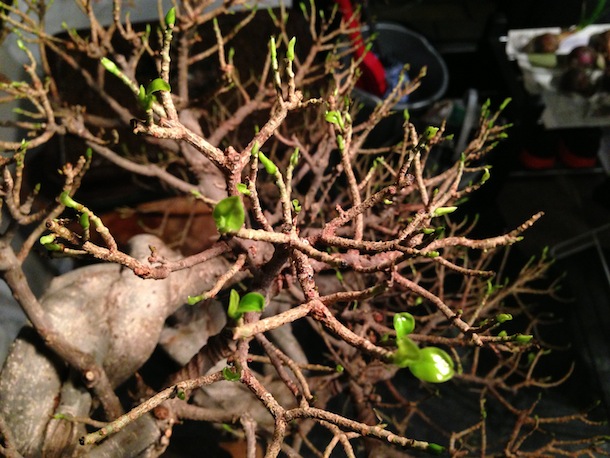 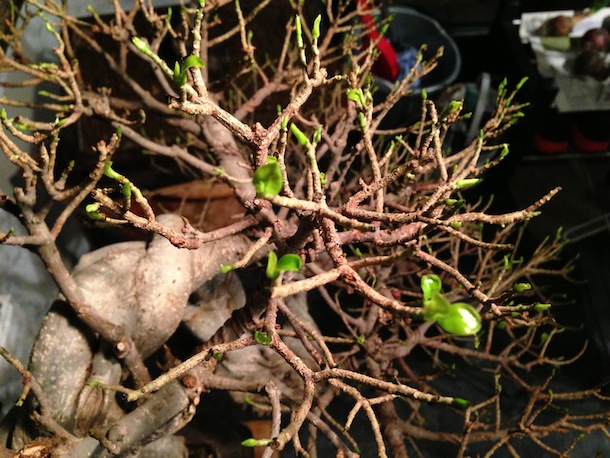 I will update in future posts on it’s continued progress to full recovery hopefully and when it is back in full leaf.

Here are a few images of the Fig from March 2013 fully recovered.. 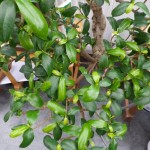 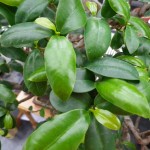 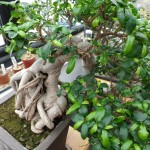 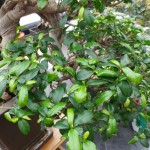 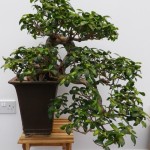 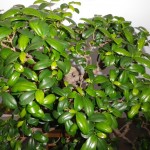