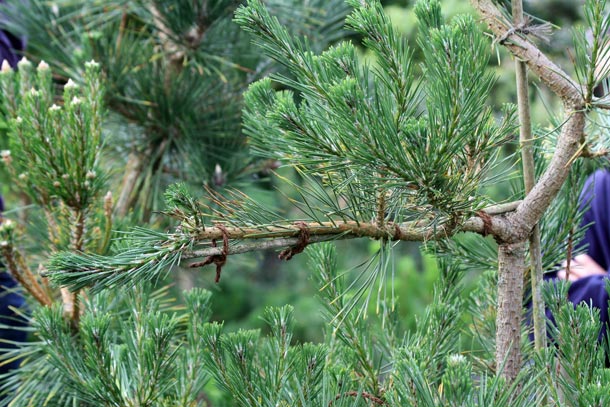 It was over to Jake Hobson for another Niwaki session today. This was the second of the two-part training programme, following up by working on trees we had decandled earlier on in May this year. You can read this post here. It was great to see the results from the previous time and the majority of the trees seemed to have progressed nicely. I also observed much more of subtle differences between not just the species, Nigra, Thunbergii, Scots but also the even more subtler differences between the trees, lineage, heredity.

The day started with work on Pinus thunbergii – these were much earlier on in the formative developmental stages and require needle plucking old foliage and pruning of the newly formed growth where necessary. This helps produce light and air to penetrate inside the whorls of foliage to aid bud production and development. This is a time consuming job, I’m sure with practice it speeds up, but I found this most therapeutic. 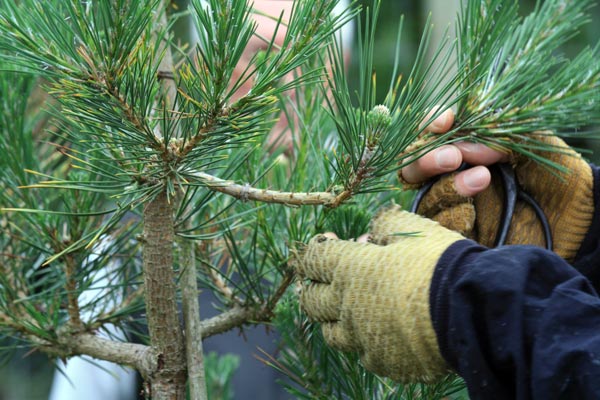 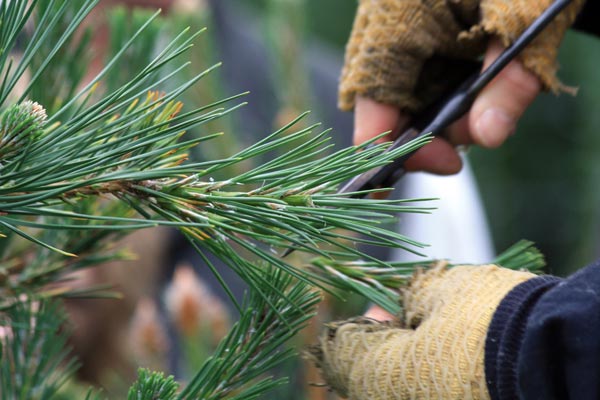 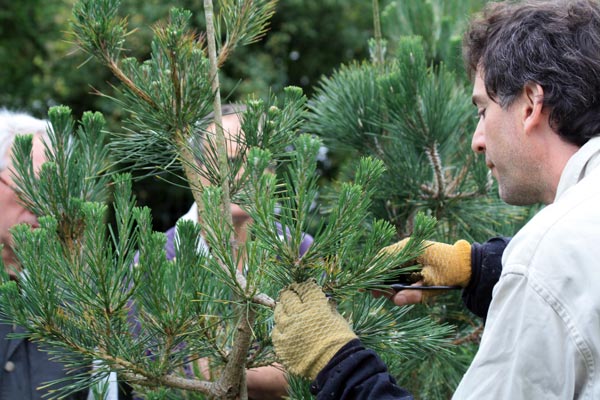 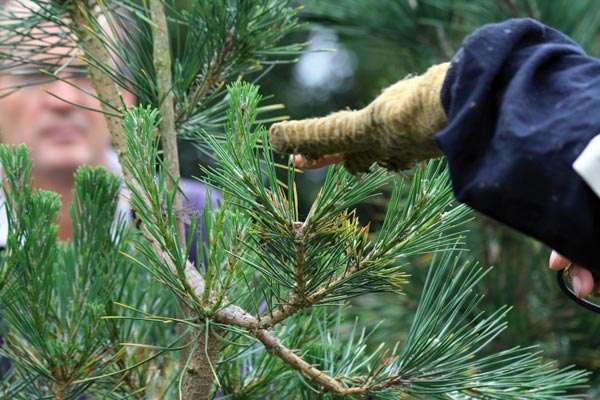 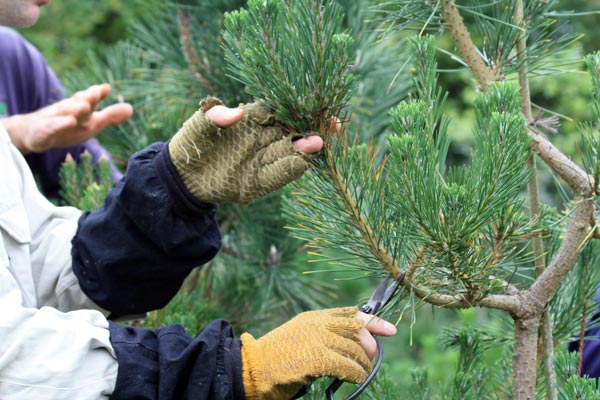 Upright branch this could be pruned 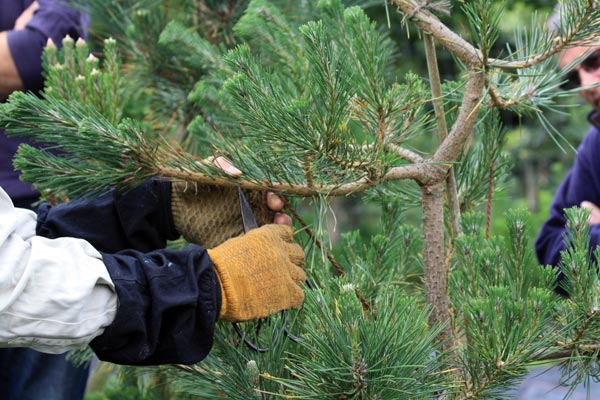 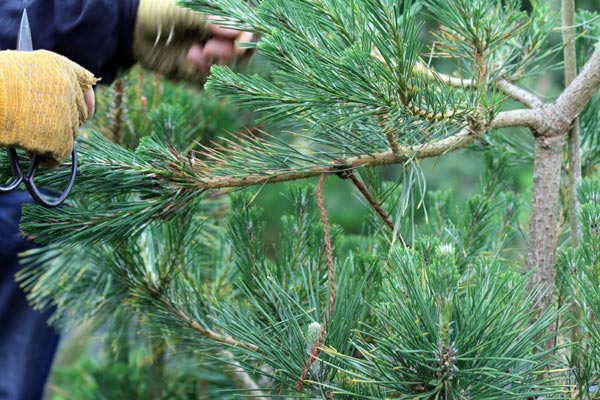 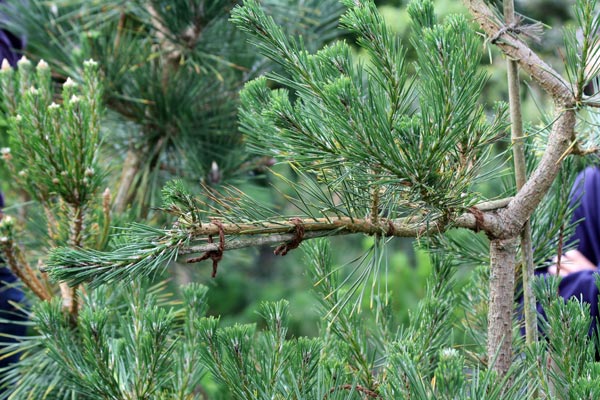 Cane tied to branch to from a splint 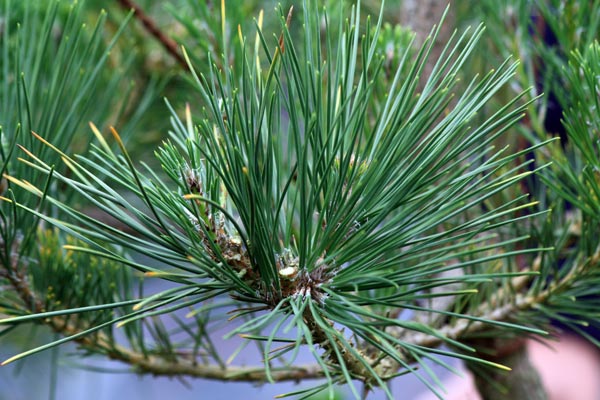 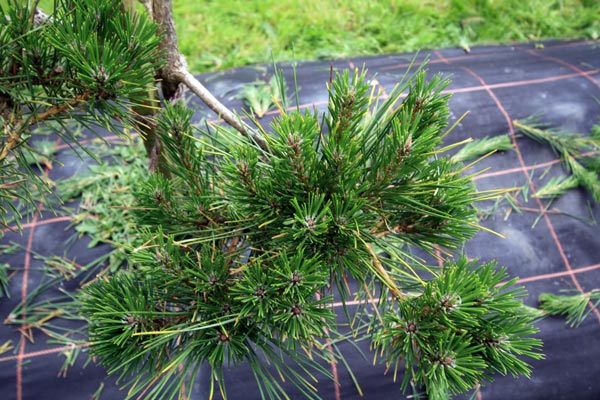 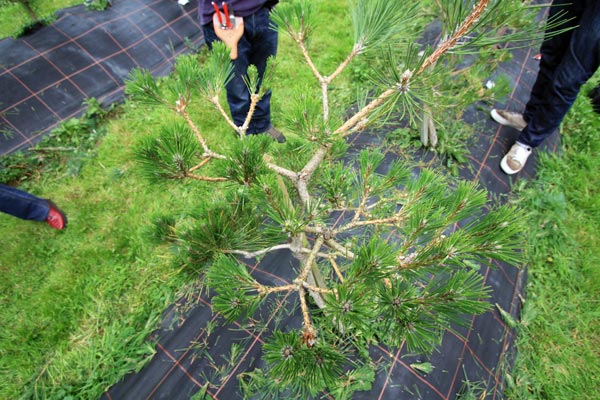 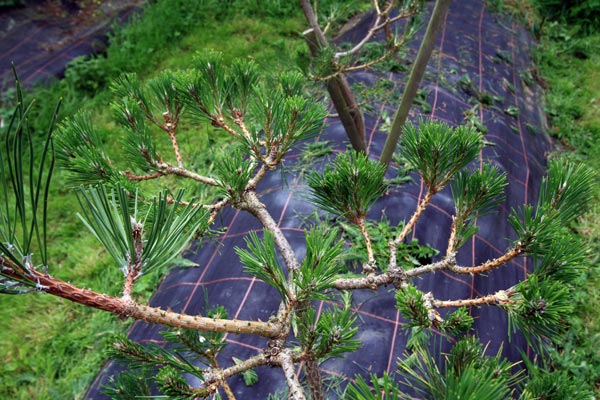 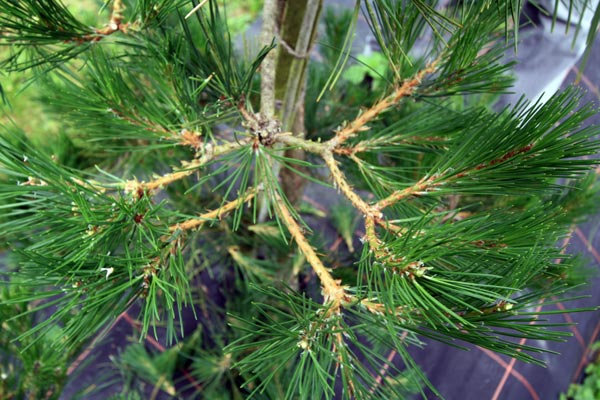 Things to remember were to remove old needles by plucking them in the direction of the buds as opposed to down the branch towards the main trunk. This method allows the old needles to be removed more easily without causing damage to the bark causing tears or rips. It is also useful to wear gloves, as pines are very resinous and the resin is still fairly active even in autumn. It seemed as if very little time had passed before we had to move onto Scots Pine, Pinus sylvestris. 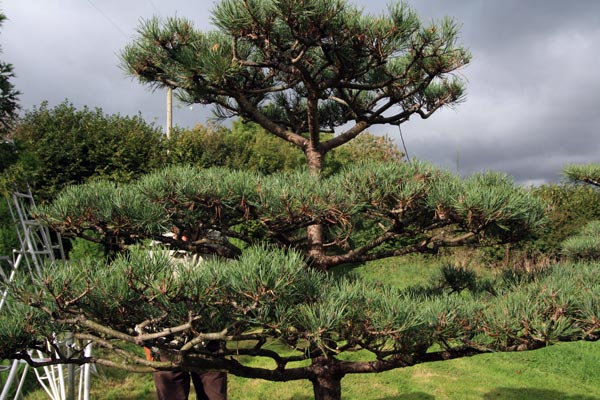 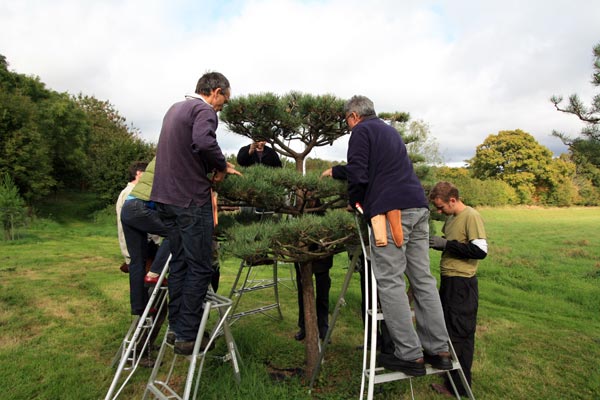 Scots Pine tends not to be as vigorous as Black pine and therefore must be treated with a little more restrain. The Scots pine Jake had us working on was also in a much more developed state to the other trees we were exposed to. This involved cleaning out the dead needles for the same reasons as stated above as well as trimming to shape, only minor amounts of pruning this time to make way for newer shoots was necessary – it was great to see a number of buds have already formed ready for next year’s flush within the shortened needles of this tree from the spring’s work. Little glimpses like this really help you visualise how the whole process works year from year.

Another aspect to be aware of is that pine needles are easily damaged through contact whilst pruning or carrying out any form of maintenance, and where possible avoid contact with the pine needles as yellow or brown marks can be the end result. This however is not to say that you should avoid working on your pine trees, much the opposite as the results of working on them are very rewarding, both for you and the tree, this is just a note of caution. Perhaps take time and more care around the needles to avoid unnecessary damage.

Working on the larger Scots Pine tree required the use of ladders and in particular some very special Japanese tripod ladders that make accessing the canopy of the trees much more easy so that you can reach further into the crown to prune or maintain the tree all over. The three legs are adjustable, and offer a very stable base to operate from when pruning without a wobble as they have a wide base that aids the stability.

Jake’s Mum treated us to the most delicious lunch, if you ever have the fortune of being served her crumble you are in for a treat. Heading back to the fields for the afternoon’s task working on Pinus nigra. It is not until you see a row of all the same species of Pines lined up next to each other that you really begin to take note of the individuality of each of them despite being the same species of pine which was intriguing. 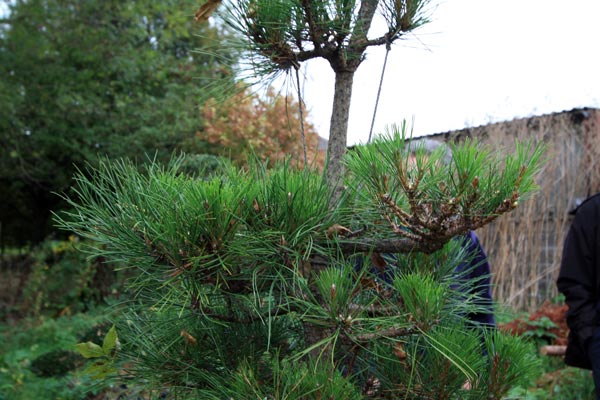 The Pinus nigra we then worked on are more advanced and have been being worked for around 10 years now – you can see the results of this work. It was also easy to see where the candle work in May had not been as thorough in some places on the trees as others. This work was less about defining the structure of the tree but more refinement, reducing the number of buds allowed to develop next year by thinning out the branch ends to one or two buds. This exercise also was not to cut the buds / candles in half but to select the buds that were to be retained and remove unwanted buds. The reason for not cutting candles at this late stage is that they will be out of sync with the rest of the buds which can affect the spring growth, so where possible it is advised to leave the smallest or shortest bud.

If a branch however was in the wrong location, japanese parcel string was used to reposition it, and we even had a go at using canes and string forming a splint to straighten branches. The knot tying I think will come with more practice so don’t be disheartened if you cannot do this at first, as we all watched Jake demonstrate this numerous times trying to follow the method for the magical knot.

So in summary, for more developed Niwaki still requiring developing or refining, the autumn maintenance is around removing old brown needles and surplus needles along the branches close to the branch unions and in particular on the undersides of branches. This is then followed by thinning out the number of buds on each branch and branchlets within the pad. For aesthetics, needle cutting was discussed and this was a method to leave all the needles at the same length to present a uniform finish but it is not essential to do this. 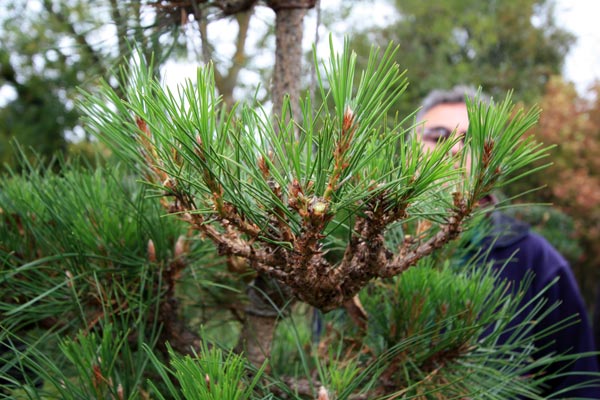 I highly recommend Jake’s book on the subject – it is very well written with some great observations and covers a lot more than just pines. Its available from his website