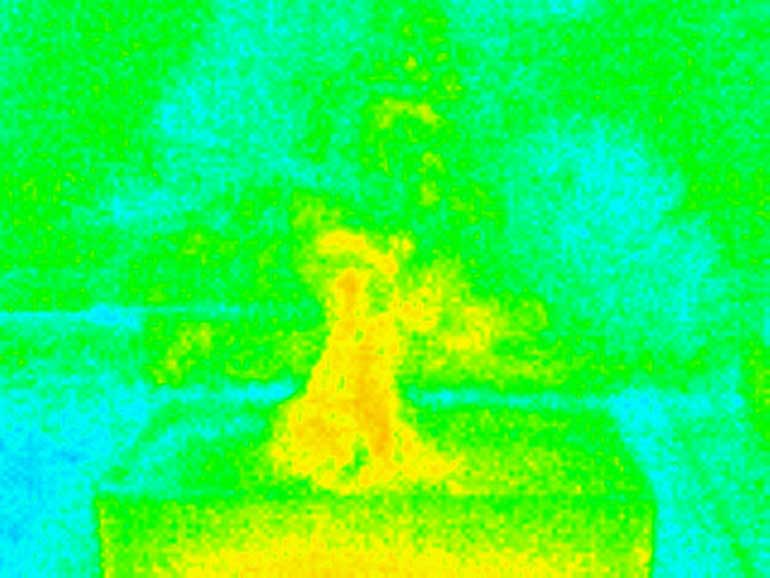 Thermography is a well know tool used widely for technical investigations of buildings, for archaeology, biology and arboriculture to name a few examples, and I was inquisitive to see how bonsai trees show up under a thermal image camera having used thermal imaging on trees before to assess health and to look for dysfunctional areas on trunks and along branches etc. The scale on bonsai is smaller than that of trees in their natural environments, but it is easier to image more of a bonsai at once. You don’t need to climb it to examine branches in more detail. 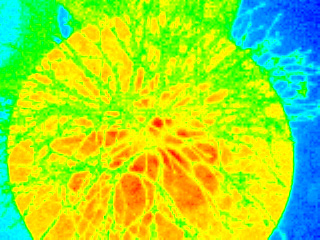 The colour changes in the images reflect the changes in surface temperature emitted by the object and depending on how the camera IS calibrated will vary the result and therefore interpretation of the results. From my perspective it was fun creating these images as some are quite surreal, but also informative and useful. 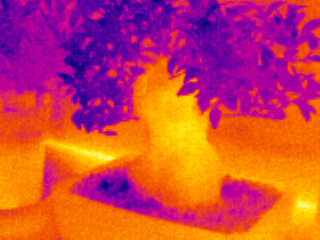 The above image is of a Taiwan Fig, the trunk is emitting a higher surface temperature / heat energy than that of the leaves and soil which is moist (thus cooler) whilst the pot (made of clay) retains a good level of heat. This is what you would expect as the leaves are glossy and thus adapted to reduce the potential for moisture loss which in turn would be related to heat loss. The canopy remains cooler than the trunk that is exposed and in direct sunlight on the window ledge. 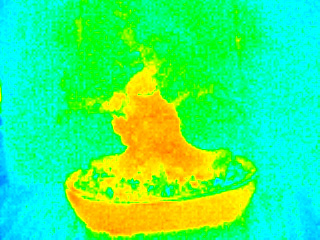 In the above image of a Korean Hornbeam, the pot is again warmer than the soil and the trunk is showing warmth while the foliage in this instance is cooler as the tree has been defoliated. There are also green areas around the trunk, this shows the void spaces between the buttress roots of the tree. It is useful then to see the root flare and how healthy each of the roots is around the trunk and locate potential areas to improve upon to enhance the nebari further perhaps. 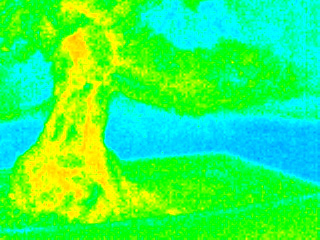 The above image is from the lowest limb of a Cork Bark Black Pine which has two large limbs that appear to be dead, and the thermal image shows limited heat energy  from the lowest branch on the right but possibly there may still be a live vein into this branch so worth seeing if it can be made to bud before making any decisions to remove it. Also given the thick corky nature of the bark it may not always be possible to get an accurate reading as it can only focus on the surface temperature and not see right into the tree trunk or branch. 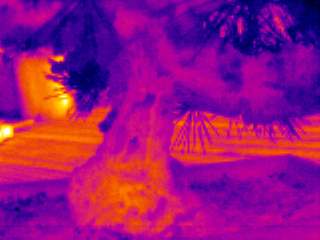 Another view of the same Cork Bark Black Pine but in a different colour setting and again dark blue to purple shows less warm areas than the red to orange and the needles show up a cooler than the lower trunk and they are specially adapted to prevent moisture loss and have a small surface area being long and narrow. 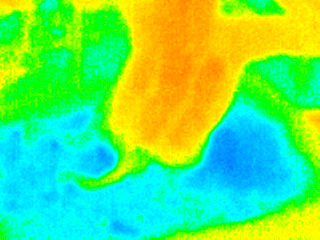 This is an image of the base of a White Pine and we were looking more closely at the base of the trunk to see where the live veins are to perhaps exploit the less strong sections in order to carve out a shari feature from the base of the trunk where an existing hollow is present under the main stem. The wood tissue around the base of this White Pine is enlarged as has formed a callous around the wound wood that has potentially formed in response to the hollow in the trunk or from being potentially grafted. There does appear to be an opportunity potentially to carve out on either one side of the bark plates and the proposal is to perhaps carve out the side to the right of the buttress root following the curve round up to an old branch wound on the trunk. 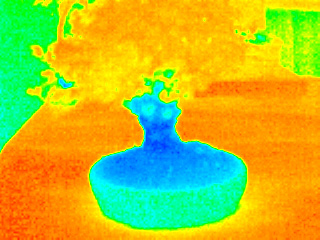 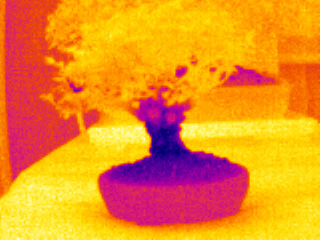 This is a Cork Bark Chinese Elm and conversely to the Fig and Pines above, the trunk remains cool as this is shaded by the canopy and protected by a thick corky bark, while the canopy is warm as the leaves are not adapted to reduce water loss and also contain more water anyway as they are broad leaved and in full leaf currently plus the foliage is very dense. The camera is calibrated to show hot or cold in the first image, so the blue and green denote cooler surface temperatures while the reds, yellows and oranges are warmer surface temperatures. The thermal behaviour is potentially caused by different tissue metabolism and therefore works well on living trees. Interesting to also note that the thermal imaging camera picks up the two nodules on the cork barks trunk and they show up a lighter blue in the first image and light pink in the second image. 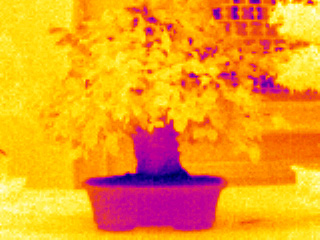 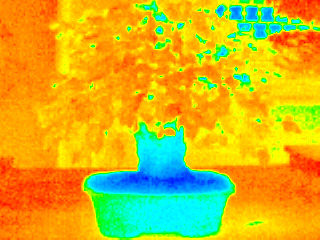 This is a Korean Hornbeam taken in two different modes but again showing the same results in that the trunk and pot remain cooler than the canopy and this tree was in full canopy at the time and I noted the slight cooler section to the right on the image and since pruning the tree it turned out that the right side had a dead branch below the canopy here which accounts for the cooler reading on the image, so it’s back to regrowing the right side to replace that dead branch!!! 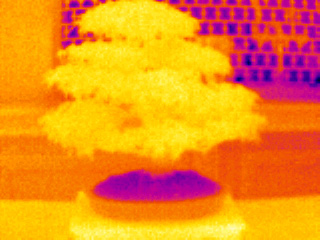 Overall it was a fun evening and the results although lacking a more scientific analysis other than pure observation were thought provoking. Thermal imaging may be one more way to see into the secret lives of trees without having to disturb them and to be able to gain a fuller appreciation of the living organisms that they are and how they work. It will not provide all the answers but help out with decision making for styling, pruning and even possible use for pest assessments as thermal imaging is used to find termites in buildings so why not trees…

For more information on Thermal imaging in the context of trees mainly check out the following websites:-