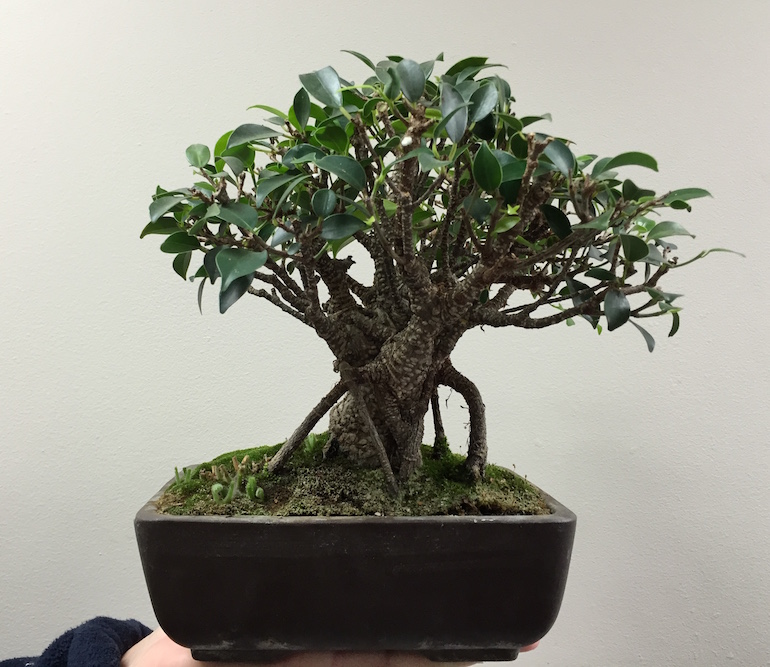 Further to giving a few talks this year on Ficus and in particular Ficus microcarpa ‘Retusa’ (Tiger bark fig) which I have grown now for over 12 years as bonsai in the UK I thought I would share some of the information I have learnt and follow so here goes. How you keep your bonsai trees will vary as everyone has different conditions in which to keep their trees but this is my experience and it has been a fun and rewarding journey so far. 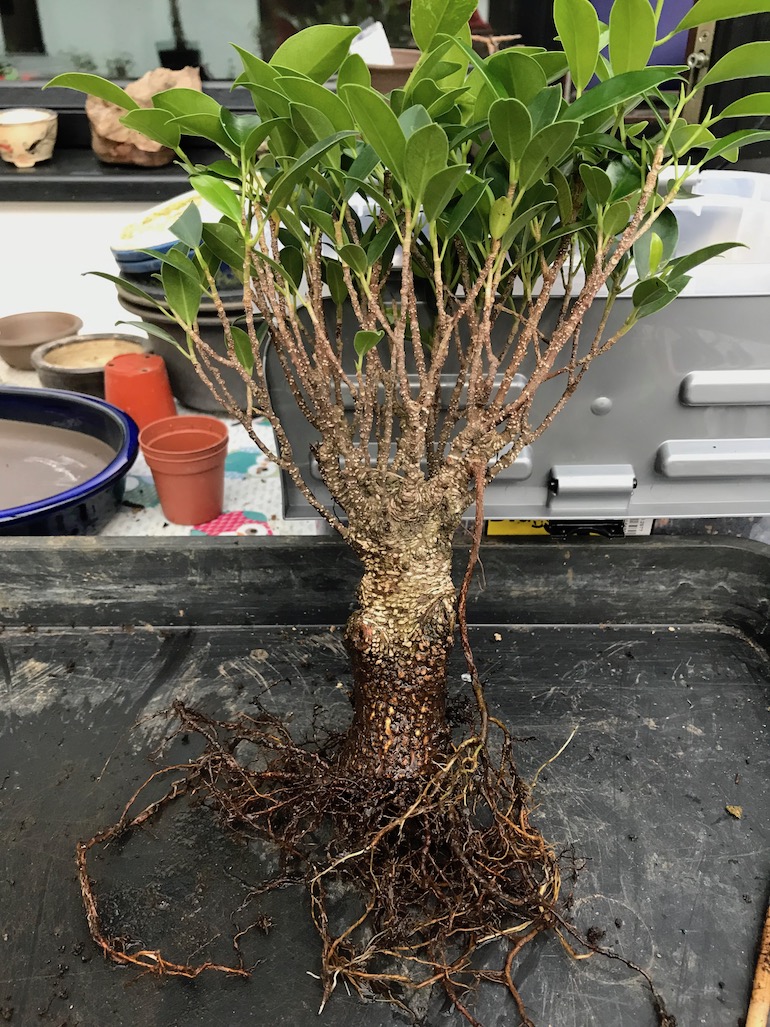 I tend to re-pot every 2-3 years for my tropical Ficus as they like to be quite set in the pots. I re-pot when the Ficus are actively growing and when it is warm, in early summer and leave off liquid feeding for 4-6 weeks after re-potting. I have also found they have long stringy roots initially and it takes time to develop a fibrous root pad in comparison to broadleaf bonsai. I use a soil mix of 50% organic including sphagnum moss, bark, sandy soil and akadama and 50% inorganic made up of fuji grit and pumice. I also add a slow release fertiliser into the soil mix, which lasts up to around 6 months. During a repot I will do a full soil change and wash the roots off at the same time as well as scrub the bark around the trunk with a toothbrush to clean off any moss or algae. If I have purchased a new Ficus to add to my collection, I will tend to spend the first few years developing roots as they tend to have limited root pad development when you first buy them and then start to develop the branches and crown once I know I have a firm root base to work from. 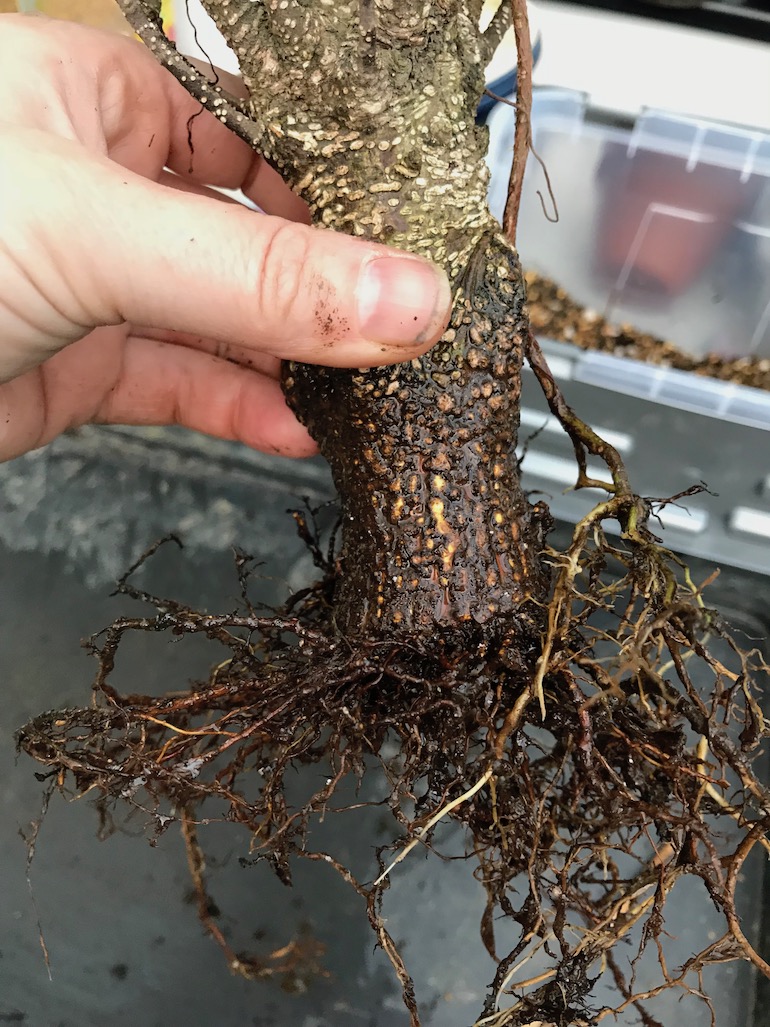 At the time of re-potting I will also prune the roots, taking off any damaged roots, trimming all the roots back and selecting those to develop a better nebari and root pad where possible. I tend to remove less than one third of the overall roots at this stage but it does depend on how established the Ficus is and how much root their is to start with. I prefer to grow my Ficus in deeper pots as this allows for greater moisture regulation and temperature as well as growth for where I keep my bonsai in a heated conservatory during the colder months. You can use shallow pots as these allow greater root flare as roots disperse over wider area but they do dry out quicker. Many Ficus for bonsai are produced by air layering in their native climate so often will need time to develop a good root system. 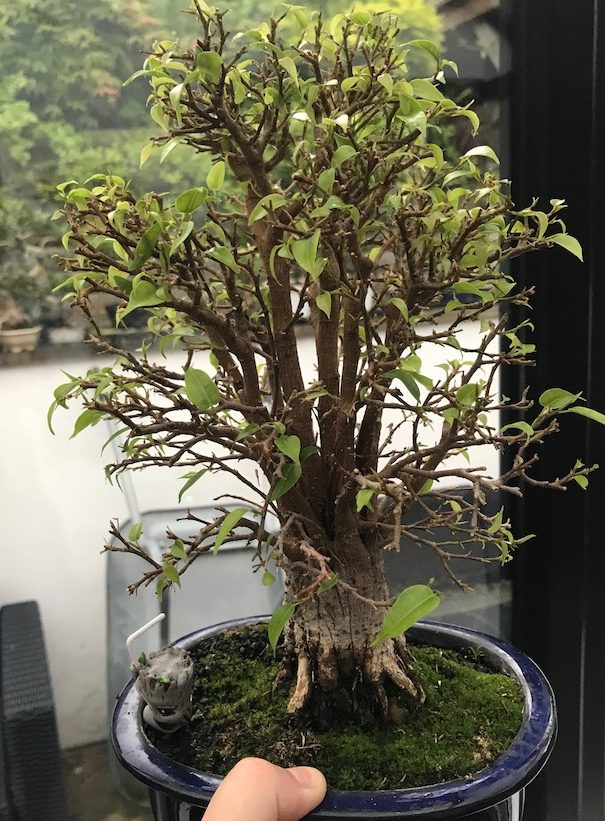 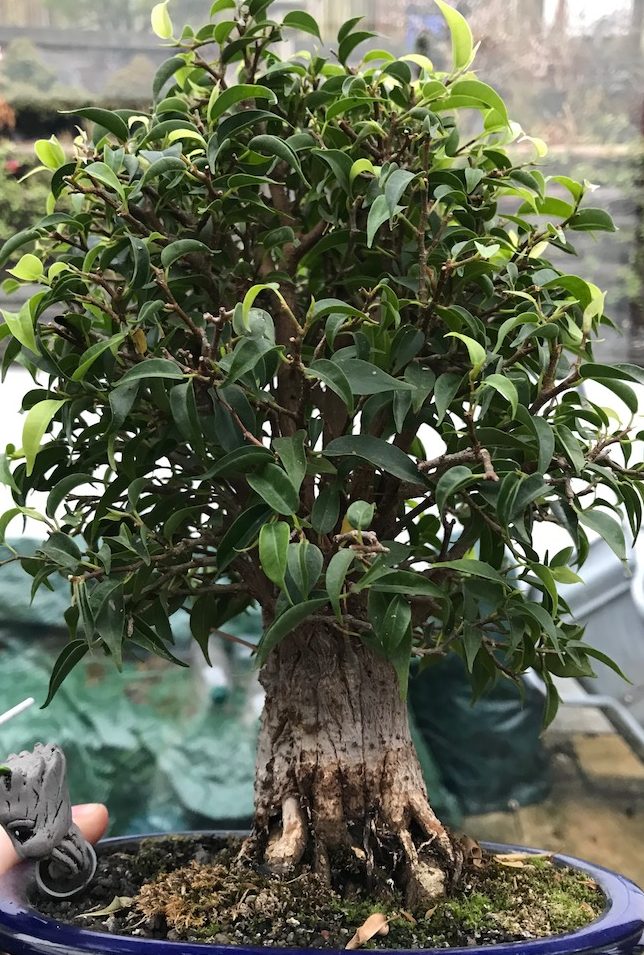 I find my Ficus bonsai trees grow very well so there is lots of practice for pruning and shaping and I prune nearly every two weeks during the very active growing season and monthly when they start to slow down. I prune all year but timing varies on the rate of growth and how I am developing each tree. I tend on each pruning to aim for leaf reduction and I do this by pruning back each shoot back to two leaves. If I want to restructure, improve bud position, improve density of canopy then I defoliate. You can defoliate at least once in a season in the UK or possibly twice to aid with leaf reduction but it does depend on how healthy your Ficus are. If they are very healthy then you should get growth within 2 weeks of defoliation and within 4-6 weeks a fully set of developed leaves again. I will also defoliate to tackle a pest infestation or recover a sickly tree but will provide more aftercare to aid with bud development by raising the humidity levels by misting daily. 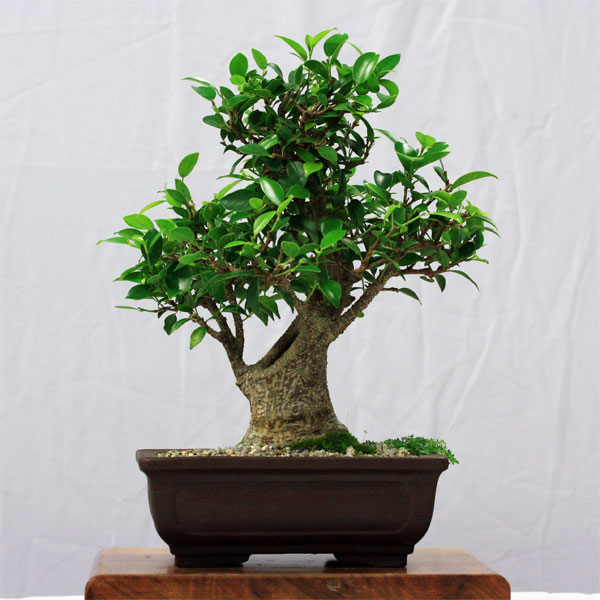 I do not tend to wire my Ficus as I have found that it does leave wire marks as my trees grow so quickly and also I get lots of branch die back. Therefore I use guys instead of wire and position branches with guys and tend to do most of my development through pruning and not wiring. I use a combination of string and cable ties and thread the string through plastic tube or mesh to prevent any marks on the branches. I leave the guys in place until they go slack and then the branch should be set in the position required. If it is not quite then you can adjust the guys and leave in situ until placement is set to how you want it. Just be careful to check then regularly to avoid any potential for them cutting into the branch. 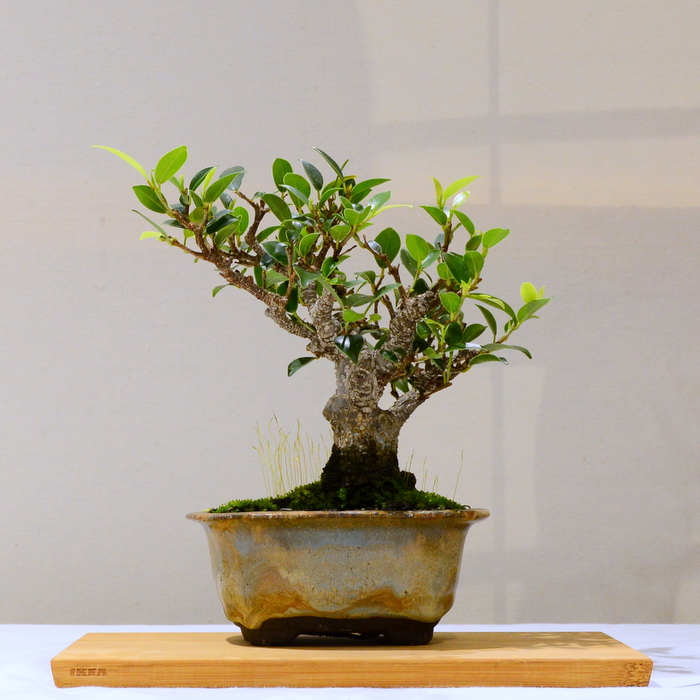 All the pruning I do is with sharp scissors, I do not pinch the Ficus as they produce a white sap, which can cover your hands, and tearing the leaf stalks does not leave a clean cut and often can damage the bud behind. I clean all my tools after working on my Ficus to reduce the spread of any pests and diseases and where possible in between working on different trees. 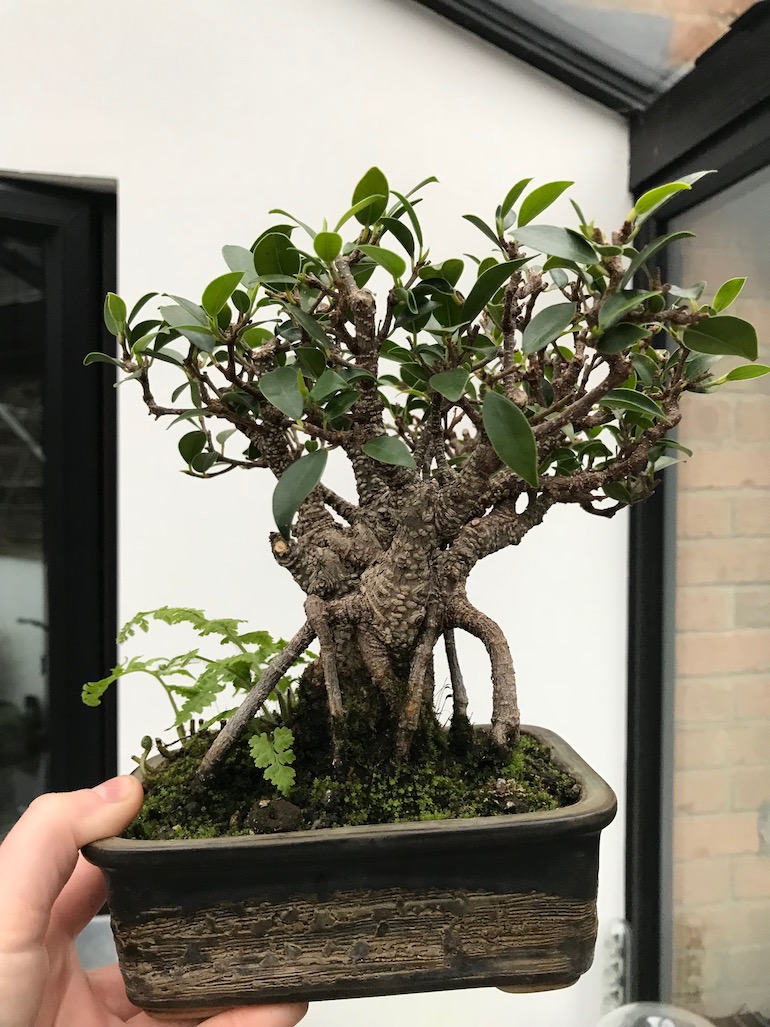 I will hard prune for restructuring a crown only when the Ficus are healthy. I tend to do more larger branch removal during the warmer weather, as the callous growth is better when the trees are more active. It does depend on the final image you are looking to create as to how much you may need to prune a tree and I have found it is sometimes better to reduce a Ficus down slowly as opposed to making large branch removals as these take a longer time to callous over in the UK climate. 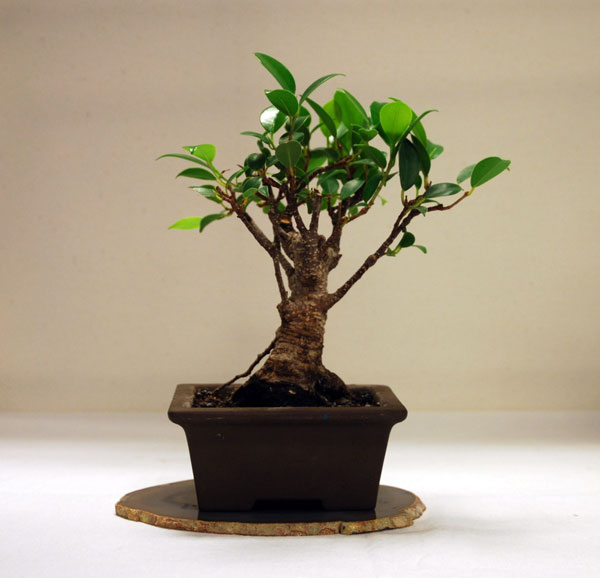 I have air layered Ficus and they will produce aerial roots very easily with the use of sphagnum moss in a plastic bag. It can be a slow process as in the UK we have a short season where it is warm and trying to get the higher humidity helps the process. I have also tried fusing trunks to improve stem thickness as well as create trees with large trunks from a group of saplings. I have grafted in branches easily on Ficus as well, they are very adaptable and fuse branches together well too. 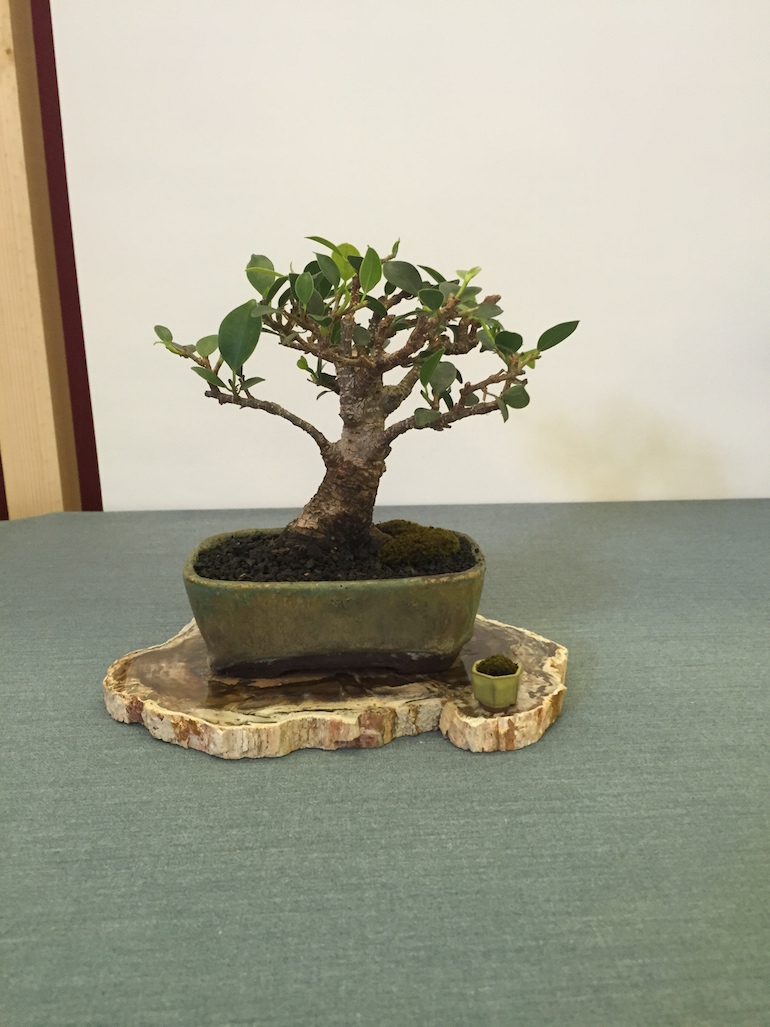 Normal feeding regimes applies and will vary with each different tree species and the more you feed the more they grow and healthier they are. Avoid feeding for 2-3 months of the year to allow false dormancy as Ficus are evergreen and shed their leaves all year round but retain the majority so you will always have a green canopy to enjoy unless you defoliate. I tend to liquid feed at each watering and have slow release in pots. I use Tomorite or seaweed as a liquid feed in general but reduce down the concentration from what is recommended on the bottle to provide a lower but regular feed when watering. 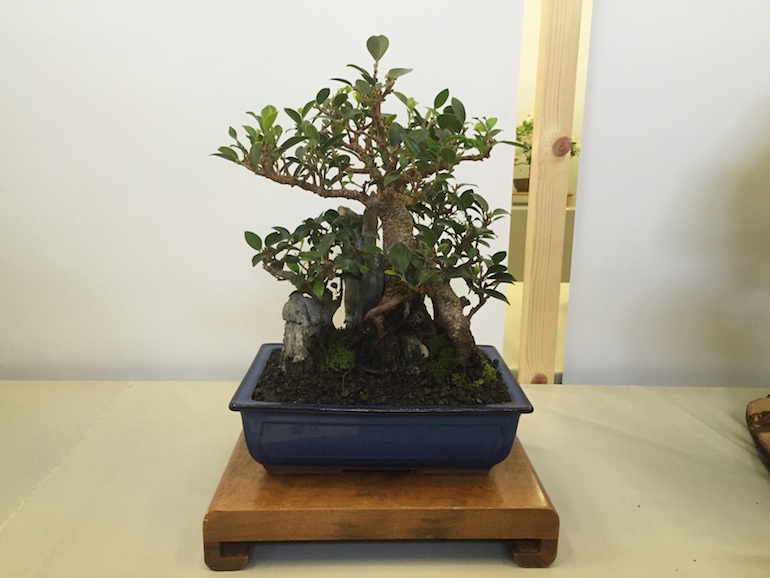 Watering is more crucial for the tropical trees as the trees tend to dry out quicker in a warmer environment so they will need more frequent watering. I tend to keep mine moist but not saturated and water every day during spring and autumn, twice daily in summer when it gets very warm and around once or twice a week in the winter if they have slowed down during the false dormancy. I have found mine do not like to dry out, but like good aeration in soil / pot and do well with a pumice layer in the bottom of the bonsai pots as well as being placed on a pumice or grit tray. 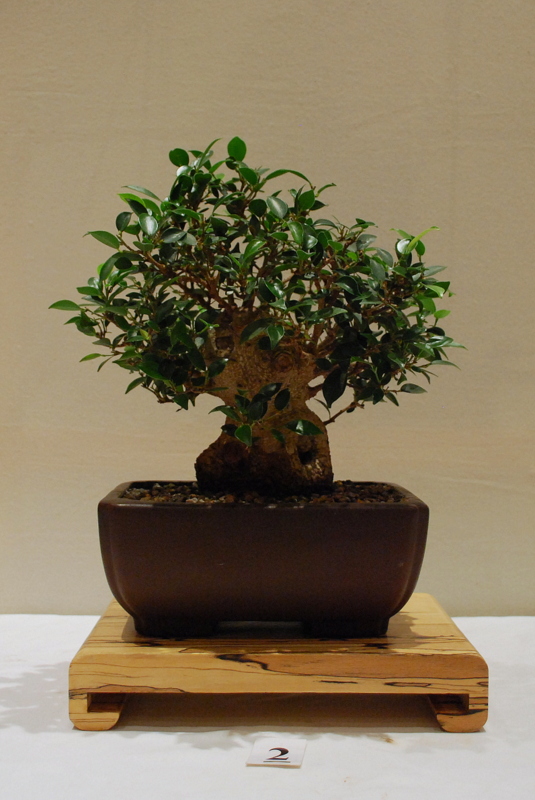 I hope that helps to provide you with some guidance on Ficus which I grow here in the UK.

Here are a few articles I have written on Ficus on our website: